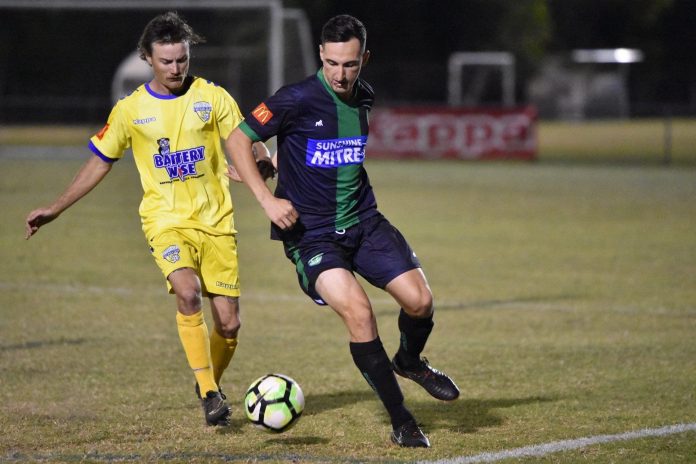 The return of some club stalwarts has reignited Kawana’s claims in the local football scene.

The Bokarina-based outfit is usually a powerhouse in the Sunshine Coast premier men’s competition, and they won the grand final in 2019.

But they endured an alarming slump last year and finished eighth of nine teams, in the absence of experienced players.

That seems a distant memory now, as they’ve won four straight games to open their 2021 campaign.

Coach Brad Lloyd said the return of some key players, including Ryan Delahunty, Deejay Firth and Kayden Oakes, has helped their cause.

“It’s like they never left really, and there’s a good feeling among the group, and that’s shown on the park.”

Lloyd said the older hands have provided stability and direction.

“They have been really good for the (younger) boys who did it tough last year.”

“They’ve helped the other players develop their games.”

Delahunty, who decided not to play in the COVID-19 interrupted 2020 season, has scored six goals in three appearances this year.

“He manages to get himself in the right place at the right time,” Lloyd said.

“He’s not as quick as he used to be but he’s definitely stronger and smarter.

“And he attracts a lot of defenders, which is good for our other forwards.

“And even though he attracts defenders he still scores goals with his strength and determination.”

The are attributes which led to him being named captain.

Firth also opted out last year and has made an impression on his return.

“He’s injured at the moment but just his presence at training is excellent for the young players,” Lloyd said.

Oakes has come back after two years away.

“He’s a quality player around the group,” Lloyd said.

The coach said the team’s lack of experience last year, along with a disjointed season schedule, hurt their chances.

“We played one game and then we were off for four or five months and then finished in November, so it was a long year for some players.”

“But they built really good club spirit and the “boys from last year who have hung around have improved their football.

The core group of young players has remained for this year’s quest.

“They gained a lot of experience, learning how tough it is in first grade,” Lloyd said.

“It was a good learning curve for those players, and they didn’t play all that badly.

“They just lacked experience in crucial moments of games.

“When you get experienced players back, those crucial moments topple your way and the results follow.”

This season consists of 18 rounds, so there’s plenty of work still to be done.

“We haven’t started a season this well in a long time, so there’s a good feeling at the club,” Lloyd said.

“But it’s a long season and it’s amateur football, so there are players who go away and there are injuries and suspensions.”

The Force have also had a relatively comfortable schedule so far, playing against teams which also struggled last season.

“We’re starting to come into a run of teams who were above us on the ladder last year, so it will be an interesting four or five weeks,” Lloyd said.

They were scheduled collide with third-placed Woombye at Kawana on May 8 (6pm), before games against four-time reigning premiers Noosa and unbeaten ladder leaders Nambour Yandina.