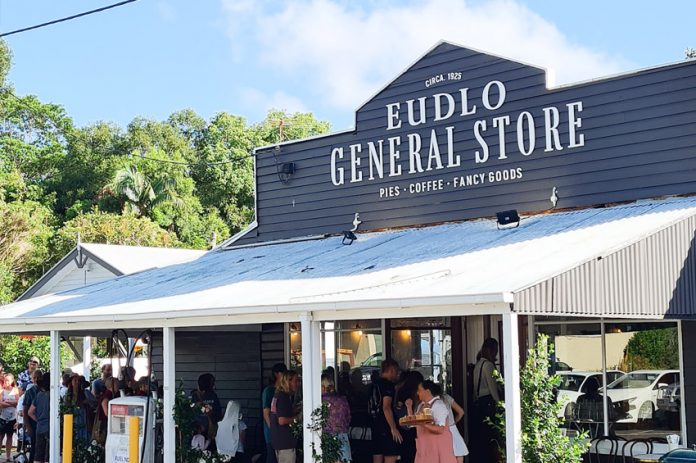 From meat pies to monks and leafy green streets, a quaint hinterland town tucked away in a valley is fast becoming a popular place to visit.

Nestled within the Blackall Range, Eudlo has a lot to offer and has seen a transformation in recent years to revitalise the once-busy timber town.

The iconic Eudlo General Store is one of the biggest drawcards enticing locals and visitors to try its delicious pies, with more than 1000 sold each week.

The main street also recently underwent a beautification upgrade that enhanced the day-to-day experience of locals, visitors and businesses.

To the west is the Chenrezig Institute – the largest Tibetan Buddhist retreat in the Western world – and right in the town centre is a railway station, making it easily accessible from Brisbane to Gympie.

Home to about 1120 residents, as well as a growing number of small businesses, Eudlo is of Aboriginal origin and means ‘fresh water eel’.

It was popular with dairy farmers and timber getters in the late 1800s and in 1891 the Landsborough to Yandina train line opened, which enabled the transport of passengers, timber, fruit and produce.

After taking over the historic general store building on Rosebud Street in 2021, local restaurateur Tony Kelly had a dream to bring the “Holy Grail of pies” to the hinterland town.

With venues including Rice Boi, Market Bistro, Piggyback and the recently opened Bocca Italian, Mr Kelly said the revamp of the original site — that had served the local community since 1925 — had injected a new sense of life into the town.

“There seems to be a real buzz in Eudlo,” he said.

“The locals have been amazing and the trade of the store is well above what we could have anticipated.

“The pies without a doubt are our biggest seller. We sell over 1000 pies a week and it’s become a real place to meet for the community.

“Everyone walks to the post office to get their mail and now that includes grabbing a coffee from the general store.

“We get a lot of tradies who come in and grab half a dozen pies for the week.

“It’s a lovely country-community vibe, something none of our other venues have. There is something special about it.”

Mr Kelly said the residents were the heart of the town, but the weekend came alive with day trippers who journeyed to Eudlo for the novelty of a pie and coffee.

He said the town also had a surprising amount of business professionals who commuted to Brisbane.

“The locals really make Eudlo their own during the week and then the weekends are full of people who come for a day trip.

“Then, on a Monday morning at 6am there could be up to 50 people at the station waiting to catch the train to Brisbane.”

When it came to housing in Eudlo, Debbie Parsell from Prime Property – who currently has two listings in the area – said the “sleepy” town had been put on the map in recent years.

She said the suburb was mostly home to larger acreage properties and the median price was $802,500.

“Eudlo has historically been a really hidden, sleepy town and people are now discovering how close it is to everything,” Ms Parsell said.

“It is close to the Bruce Highway and has the convenience of the train station, plus the local school and it is close to neighbouring towns.

“We are seeing buyers vary from young families to couple in their early 60s.”

Ms Parsell said the market had changed in Eudlo over recent years and where once a house was listed for seven or eight months, lately properties sold in a matter of days or weeks.

Another drawcard for the town is the Chenrezig Institute, which opened in 1974.

The onsite Big Love Café is open for bookings for breakfast, lunch and supper across Friday, Saturday and Sunday.

Meanwhile Sunshine Coast Council has been investing in revitalising streetscapes across the region’s small towns, including in Eudlo. 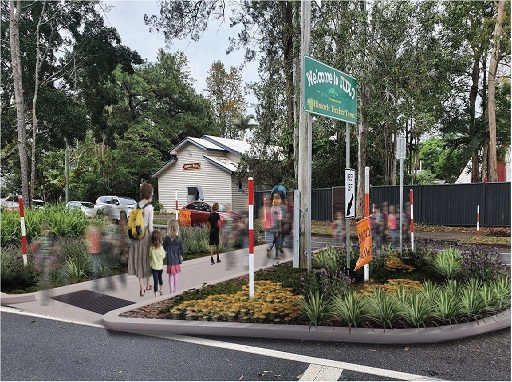 A recent upgrade in the main street was part of an extensive streetscape engagement process from November 2020 and was completed in April this year.

It saw upgrades to pedestrian crossing to make them safes along Rosebed Street and Corlis Avenue, as well as new garden beds and plants to create a soft, green landscape.

The recent Council budget also announced upgrades to two gravel roads in Eudlo to make them safer for residents.