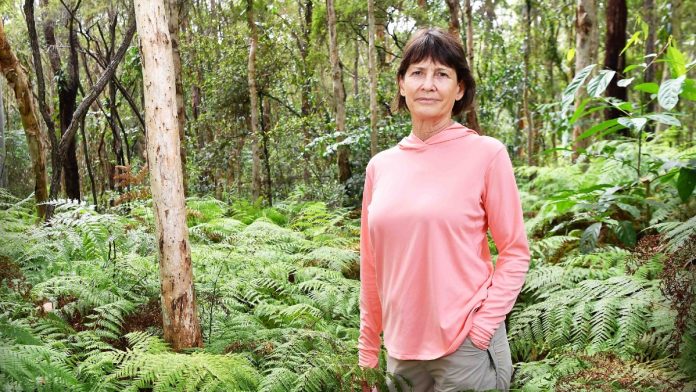 Greens senator Larissa Waters is urging the State Government not to log a native hardwood forest on the Sunshine Coast just as it’s about to gain conservation protection.

The Queensland Government plans to chop down up to 50 per cent of trees in Ferny Forest, near Landsborough, for power poles and landscape materials.

As reported by Sunshine Coast News, the community, led by the Save Ferny Forest group, has been maintaining momentum against the harvesting with protests at the site on Steve Irwin Way every Friday afternoon and an online petition.

Senator Waters, the leader of the Greens in the senate, has added her voice to the public outcry and warned that Ferny Forest may not be able to recover.

She said the community was cynical about the timing of what would be the final logging before the forest becomes conservation land under the state’s own Native Timber Action Plan.

“Therefore, much of the community sees this logging by the Queensland Government cynically, as a last-ditch effort to make a buck before the protections come into place on 31 December 2024,” she said.

In a letter to State Government and Sunshine Coast Council leaders, Senator Waters said it had taken decades for Ferny Forest, an area of 129 hectares in Beerwah State Forest, to recover from the last harvest in the 1990s.

The picturesque park is loved by mountain bikers, runners and walkers who enjoy its 10km single-track trail looping through diverse tall trees, with an understory of ferns and native shrubs like banksias.

“Consequently, there is an enormous risk that the forest, which hosts at least 190 native plant species, will not be able to recover this time.”

Senator Waters called on the State Government not to undertake one more harvest in 2022, just as the forest was poised to gain protection against any future culling from December 2024.

Senator Waters wrote that more than fifty per cent of the total number of trees could be removed, some of which were believed to be 600 years old.

“Importantly, selecting out mature trees for logging also means losing large trunks that would have become habitat trees and future hollows for species like the greater glider.

“Greater gliders only bear one young, and need from two to fourteen trees for dens and hollows to survive.

“Furthermore, the First Nations owners of this land, the Gubbi Gubbi people, have requested the immediate cessation of these plans to log Ferny Forest due to its immense cultural significance and heritage,” she stated.

Each month an average of 1200 people visit Ferny Forest for recreation purposes.

Senator Waters said it was vital that Ferny Forest was protected against any logging.

“To allow this forest to be destroyed to make power poles would be devastatingly short-sighted.”