If you can walk, you can learn this dance that leads to fun, fitness and friendship 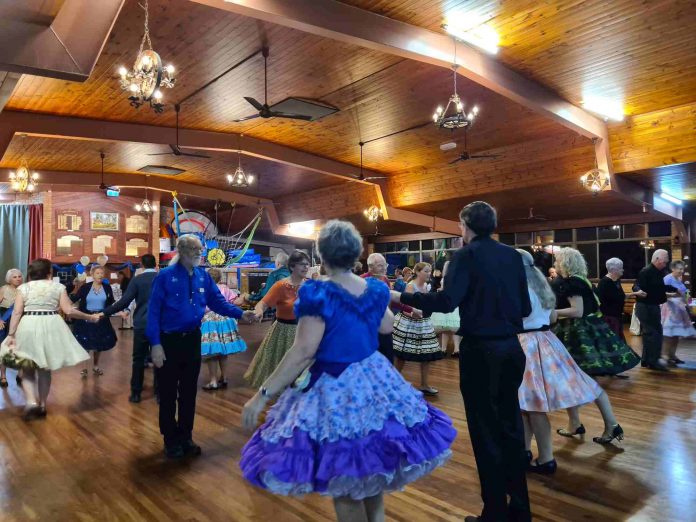 Members of a Buderim-based club say square dancing is a great way to keep in shape but there are many other benefits.

The Suncoasters Square Dance Club, which has operated for more than 50 years, provides square dancing options for learners and experienced dancers.

They’re encouraging more people to get involved in the fun form of dancing that promotes fitness and socialisation.

The theme’s simple enough – dance in a square and make a new circle of friends – and club director Nev McLachlan said it led to physical, mental and health benefits.

“Young or old, square dancing is a perfect way to build physical activity in your life because two hours of square dancing is equivalent to a five mile walk and the music and fun makes you forget you are working out while dancing,” he said.

“You don’t need special skills or dance experience to learn square dancing; if you can walk, you can learn to square dance,” he said.

“What is important is you move around the dance floor in patterns with other dancers to the cues of the caller who will teach you the steps to the pattern you need to know and we dance to all types of music.

“Square dancing can bring people together and it encourages you to create a social life and make new friends that make you laugh and support you as you learn from others.”

Learning sessions are held every Tuesday night at the dance centre at 260 Dixon Road, Buderim.

On the fifth Saturday of each month, there is a themed night, when dancers have the opportunity to dress up.

Square dancer Robert Eldridge said it was great exercise and a fantastic way to meet people.

“About 16 years ago, I found myself alone and yearned for company,” he said.

“I stumbled upon square dancing and have since made some fantastic lifelong friendships.”

“I moved up from Brisbane in 2003 and was on the lookout for something to keep me active,” she said.

A friend told her of dance classes at Buderim Gardens Retirement Village and she decided to give it a go.

“I fell in love with it and wanted more so I decided to join the Suncoasters Square Dance Club,” she said.

“Now you can find me dancing three to four times a week.”

June McCarthy took up square dancing 20 years ago with her late husband and she has since become an Angel.

“Angels are those of us who have been around for a while and who are more than willing to hold the hands of those just starting,” she said.

“Anyone wanting to try square dancing are placed in the care of an Angel who will help guide them through all the moves and steps.”

The club essentially started with its first dance at the Nambour Showgrounds Hall in 1970.

The Sunshine Coast Square Dance Centre was built in 1985, as the first purpose-built square dance hall in Australia.

It was made possible, largely thanks to the late Clive and Ada Latcham, with assistance from Sunshine Coast Council, fundraising by club and private donations from the centre’s trustees.

It’s believed square dancing formed in Europe in the 17th century, before it thrived in the United States. It started in Australia in the 1950s.