Astonishing plan for resort and canal estate in swamp

Astonishing plan for resort and canal estate in swamp

Flashback: the far-fetched plan to build a luxury resort and canal estate where sandflies swarmed 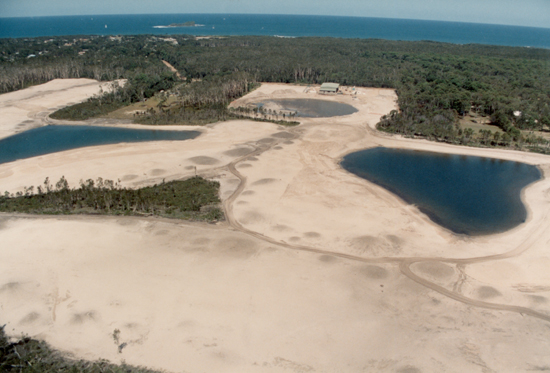 It all sounded a bit far-fetched when, in 1987, plans were outlined to Maroochy Shire Council for a five-star resort to be built on the north shore of the Maroochy River.

This was the spot we called the Black Bank, frequented only by fishermen keen enough to drive down the sandy dead-end track from Mudjimba to throw in a line when the tide was right. Pincushion and Maroochydore could be seen on the opposite side of the river.

When this astonishing concept was followed up with talk of a vast canal housing estate to go nearby, it was met with utter disbelief.  This, after all, was an area of ti-trees and mangrove swamp, home only to swarms of sandflies.

Nevertheless, the $130 million resort to be called Twin Waters opened “where the river meets the sea” with great fanfare in November 1990, just over two years after construction began.

Scroll down for more flashback images

Even hardened cynics had to admit the 374-room hotel, 18-hole golf course, swimming pool and central lagoon had transformed the north shore.

But not everyone was pleased, particularly as the biggest development ever proposed for Maroochy Shire required a special lease of 20ha of a 260ha Crown Recreation Reserve.

Giving away public land is never welcomed and the Maroochy River Conservation Park was established in 1992 to protect the rest.

Until Twin Waters, Mudjimba and its western neighbour Pacific Paradise had sat quietly and largely unnoticed north of the Maroochy River.

There was a sprinkling of beach shacks and a handful of permanent homes but that was it.

The main problem was that both areas were low-lying and flood prone.

It was a nightmare in the late 1960s when my father built a so-called beach house a few hundred metres down Mudjimba Beach Road and at least 1.5km from the beach.

For kids, it was too far to walk down the thin strip of bitumen to an un-patrolled beach and the swimming pool at the Pacific Paradise (ambitiously named in 1959) shop and service station over the road was usually a green cesspool.

The house stood there, on its own, for years and was notable only for the bird of paradise mural Dad painted in the carport.

The reason the area remained unloved was that it was a flood plain.

As it grew during the 1970s and early 80s, truckloads of fill were brought in so that houses sat on their own mounds, like cherries on a Christmas cake, to keep dry.

There were regular stories of home buyers finding themselves living in houses on stilts while the foundations wobbled below them.

One family could watch the tea spill from their cups when the washing machine was spinning.

The other problem was mosquitoes in the swamp around them.

Eventually, the council undertook a major drainage project and this, along with property prices being significantly lower than on the southern side of the river, brought in hordes of new residents.

Having the Twin Waters resort next door didn’t do any harm either, but the biggest drawcard was the new bridge over the Maroochy River, which put the north shore within minutes of Maroochydore.

The long drive via the David Low Bridge at Bli Bli, which had first made the northern connection in 1959, was made redundant when the first stage of the Sunshine Motorway opened in January 1990. The bridge was duplicated in 2007.

Today, Pacific Paradise and Mudjimba bear little, if any, resemblance to the modest collection of beach houses of 50 years ago and Twin Waters, originally part of Mudjimba, officially became its own suburb in 2003.