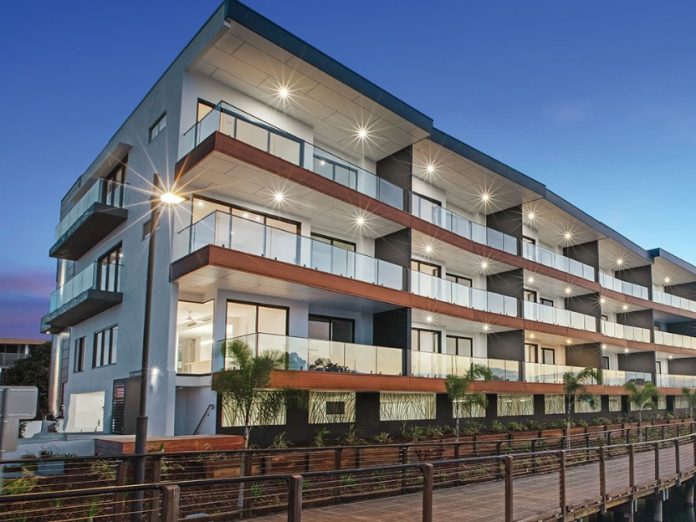 A proposed upmarket apartment complex in one of the Sunshine Coast’s most exclusive estates has been scaled down from six storeys to four to improve the chances of approval.

Plans reveal the Living Choice project in Sunshine Cove, Maroochydore, features 128 units each with its own balcony.

The medium-rise development on 8,178sqm would include a communal space with a pool and pool deck, large garden courtyard, roof deck and an indoor gym.

The design was downsized significantly after council raised concerns during meetings with the developer’s planners before an application was formally lodged.

Notes from a pre-lodgement meeting between council officers and planners from Innovative Planning Solutions show council had reservations about the original concept.

“The overall height, bulk and scale of the proposal is considered to be out of context with the existing residential outcomes in Sunshine Cove,” the council wrote in records of the meeting.

The council also noted the balconies were too small and did not meet minimum dimensions and there was not enough parking.

The applicant was advised to reduce the building height by exploring options to “sink the development into the ground” and incorporate a basement carpark.

When the official development application was formally lodged in April, the designs had been altered to address the issues raised by council.

The applicant’s planner James Brownsworth, from Innovative Planning Solutions, told Sunshine Coast News they chose to knock off the top two floors to take the “path of least resistance”.

However, Mr Brownsworth explained that six storeys (or 25m) was actually allowable under the precinct’s master plan.

“The baseline is four storeys, but you can argue for six storeys,” he said.

“We actually had detailed designs for six storeys but after meeting with council and them expressing reservations of the tests to achieve six storeys we thought rather than go through an adversarial process we’d take the path of least resistance.

“The rationale for four storeys was to make this as simple as possible and listen to the council.”

Mr Brownsworth said in reality the broader precinct was “under-developed” for the number of properties that could be built under the master plan.

He said precinct six, where the apartment building is proposed on Sunrise Drive, could contain between 500 and 600 homes.

But with this 128-unit project as well as existing residences on the lots and the Estia aged care home he estimated it would only reach around 400 properties.

Mr Brownsworth said when completed, the new apartments would be of the style and finish Living Choice was known to build — very high quality, very liveable and with communal facilities.

The planning report shows the balconies which overlook Somerton Drive, Amenity Avenue and Sunshine Cove Way towards the lake now have a minimum area of 20sqm.

Living Choice was also behind the Brighton Apartments in Sunshine Cove which Mr Brownsworth said were of a similar standard.

However, even after making the design changes, the proposed development is still slightly above the council’s density requirements.

The applicant’s own planning report states that its proposal for 128 units “exceeds the prescribed threshold” for the subject site which is a maximum of 108 units.

However the applicant’s report also states its density is “consistent with the overall intended densities within this part of Sunshine Cove”.

Parking is another area area where the application falls slightly short of council’s wishes. The project is offering 162 parks compared to the required 167.

The development application is considered impact assessible because it still does not strictly meet design and form rules and as such requires public notification.

Mr Brownsworth said Living Choice would work collaboratively with the council and engage with residents during the process of seeking a development approval.

The land holding was originally part of Wises Farm, a large rural land holding owned by the Wise family and falls under the Wises Farm Central Medium/High Density
Residential plan.

It’s located about 1km from Sunshine Plaza and 800m to the Kon-Tiki medical centre and was acquired by Living Choice in 2001.

Living Choice is known for retirement villages and has two on the Coast at Kawana Island and Twin Waters.

Sunshine Cove is a 106 hectare master-planned estate with lakes and parks that is almost fully developed.