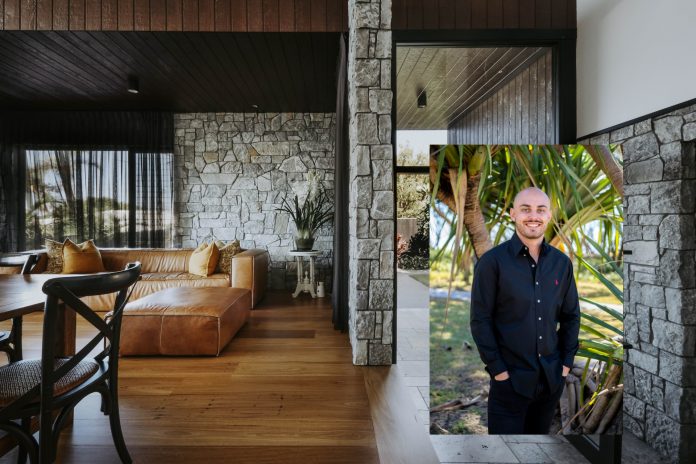 The son of Maroons legend Kerrod Walters has set a record sales price in one of the Coast’s hottest suburbs in just his first year as a real estate agent.

Former mechanic Brooke and his famous father both joined Elite Lifestyle Properties, based in Minyama, at the same time.

As lead agent, 26-year-old Brooke has already sold a whopping $15 million in property, including his most recent in Shelly Beach which set a new record for the upmarket area.

Brooke has another $20 million listed on his books, one of which looks set to smash the record in Shelly Beach again with a beachfront property.

In the current sale of 2a Banksia Street, which settled on Thursday, Brooke achieved a stunning $1 million above the previous record for Shelly Beach.

The six-garage, four-bedroom and three-bathroom renovated luxury home is understood to have sold for around $4.5 million.

“It took three weeks from the first inspection to the local buyers signing the contract,” said Brooke.

“It was an off-market campaign, with the house’s recent quality renovation a strong selling point.

“Partnering this with a strong and a well-structured campaign, I was able to achieve a more than 50 per cent increase from the property’s last sale price.

“The buyers, who wanted to upgrade on the Coast, are astute so they knew exactly what they were after and this property ticked all the boxes”.

Like his dad, a former Broncos, Queensland and Australian rugby league star, Brooke attributes his success to being “part of a champion team”.

“When I took on this new challenge, I set myself goals and while it’s great to have achieved a record sale for Shelly Beach early on, I couldn’t have really done it without the support I received from those around me, which has been tremendous,” he said.

“I’ve set the bar pretty high, and while Dad has given me some advice along the way, he’s mainly remained in the background.

“He’s taught me that you don’t succeed if you don’t strive to hit your targets in what is a very competitive market.

“And it’s about doing it with a smile on your face, it’s about enjoying the experience”.

“Having been a real estate investor himself from a young age, Brooke certainly hasn’t looked back since joining our team,” Mr Lund said.

“He’s got all the attributes — a fierce work ethic, a positive outlook and the determination to leave no stone unturned when it comes to achieving the best outcome for his clients.”

Mr Lund said the market remained red-hot on the Coast, with the agency also setting new sales records in the suburbs of Minyama, Birtinya and Aroona in the past couple of months.

“While there has been talk about the market being impacted because of interest rate rises, and increasing cost of living expenses, the Sunshine Coast remains a favourite for prestige buyers,” he said.

“There are still opportunities out there. You just have to be constantly monitoring the market and be ready to make the decision to purchase at short notice.”