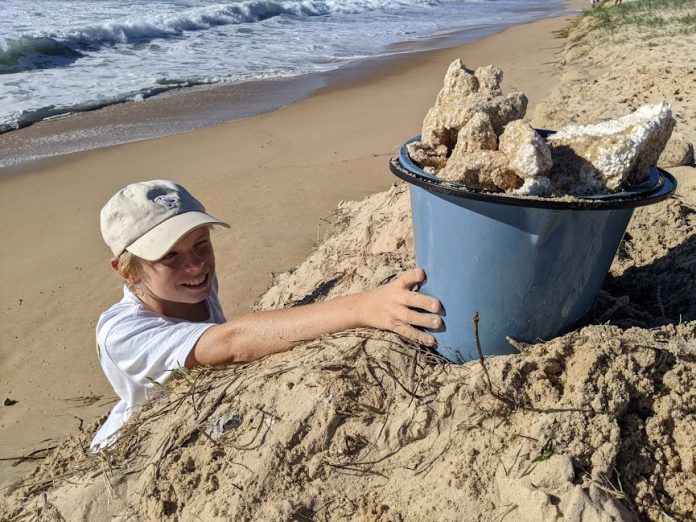 It may look like it’s been snowing on the region’s beaches, but the tiny balls of white sprinkled across the dunes are toxic to animals that eat it.

Volunteers from environment groups are devoting countless hours to collecting large polystyrene chunks, as well as the individual white beans floating in from the ocean after the floods.

At first, the rubbish washing up on the Coast was huge slabs of concrete and polystyrene from smashed-up pontoons.

In the Noosa area alone, the council has removed 18 pontoons that have washed up from Brisbane in the past three weeks.

But now those massive lumps are breaking down into individual balls like you’d find in a bean bag, and being blown up the beach and on to the dunes.

Reef Check Australia general manager Jodi Salmond said Castaways Beach was currently the worst-affected area but a few weeks ago it was Peregian.

Ms Salmond was at Castaways Beach (Access 40) on Monday with volunteers from the Sunshine Coast Environment Council (SCEC) and Ten Little Pieces.

One of the most-effective ways to collect such minuscule pollution is to grab a sieve and begin the painstaking work.

“There are hundreds of millions of tiny bits in the dunes and we’re collecting them with sieves and dry sand,” Ms Salmond said.

“We’re calling on the community to band together. We pride ourselves on our beautiful beaches. But to keep them clean, we need to all lend a hand, even if it’s just a tiny bit.

“Take a sieve and head to the beach and even if you only fill a small bag, that’s something.

“Reef Check wants to empower people to protect our beaches and at the moment we need all hands on deck — even if it’s only five minutes.”

Ms Salmond said the little white balls were toxic to marine life that were likely to eat them.

“They float on the water with other debris and look like a food source for animals,” she said.

“After ingestion, they can cause disease and likely starvation if that’s all they’re eating and it can clog their system up.

“At the moment, it’s turtle-hatching season.”

On Thursday, a team of 10 volunteers did the backbreaking task under the hot sun of lugging 210kg of big pontoon and polystyrene lumps.

On Friday, Noosa Shire Council organised machines to continue the work at Castaways Beach (Access 40) but an equipment breakdown forced workers to dump polystyrene back into the ocean.

Horrified environmentalists filmed what they saw happening before they were later told why the council had taken that course of action.

A council spokesman explained that while they were excavating polystyrene from the dunes, a backhoe and a bobcat had broken down on the incoming tide, leaving excavated polystyrene at risk of being reburied.

“Crews made the difficult decision to use the only equipment on hand — a Posi-Track and beach-grooming tractor — as best they could to prevent the polystyrene being reburied,” the spokesman said.

“Excavated polystyrene stockpiled on the beach was floated on the tidal edge and collected and removed by the beach-grooming tractor.

“The video circulating on social media shows only one part of the process — the floating of the polystyrene on the tidal edge.

“The important second part of the process — removal of the polystyrene separated from the sand using the beach-grooming tractor — isn’t shown in the video.”

The council spokesperson said the beach-grooming tractor would operate again on Monday and Tuesday, removing further polystyrene from the beach.

Council crews would also collect, by hand, smaller polystyrene particles across the weekend.

“Once again, the community effort to help rid the dunes of the smaller sand particles is greatly appreciated, with bags on hand at the major access paths for residents to collect, fill and return.

“Council and MSQ (Maritime Safety Queensland) have removed 18 washed-up pontoons from Noosa’s beaches in recent weeks, as well as truckloads of debris, in a complex and challenging salvage operation.

“Council crews and contractors have been working solidly for three weeks on the difficult task of removing washed-up pontoons and embedded polystyrene from Noosa’s eastern beaches and Noosa North Shore.”

Ms Salmond said unfortunately there was no way to capture some of the polystyrene that had been “refloated” by council. While some had washed back up on the beach, she said some had floated away.

The large pieces had also broken down to form the plastic “snow”.

Without casting blame, Ms Salmon said lessons needed to be learnt from what went wrong.

Ms Salmon said the broader issue was the pontoon materials and whether an alternative to polystyrene could be used instead.