Giving hope: meet our big-hearted Citizen of the Year

Giving hope: meet our big-hearted Citizen of the Year

'Giving us all hope': inspirational Coast figures recognised for their tireless efforts 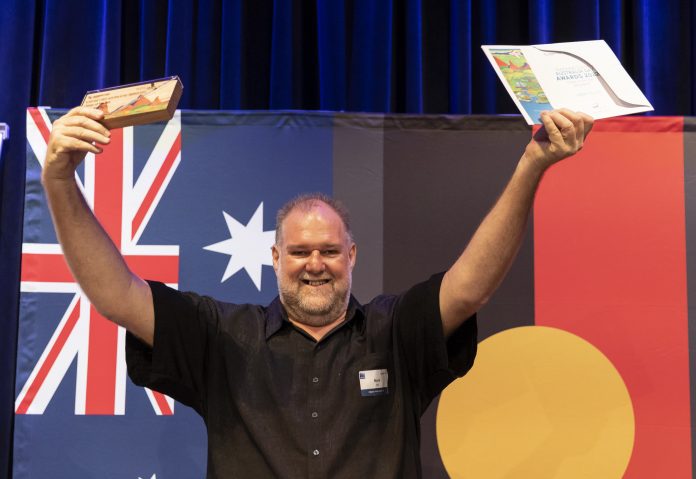 A Buderim man who has worked tirelessly to improve the lives of those less fortunate has been recognised as the Sunshine Coast Citizen of the Year.

Mark Ellis was acknowledged during the Sunshine Coast Australia Day Award ceremony on Tuesday, after the event was postponed in January due to the pandemic.

Mark was among the local achievers recognised for their contributions to the region.

Through his role as Community Development Coordinator at the Maroochy Neighbourhood Centre, Mark co-ordinates the One Roof Program, which provides everything from hot showers and haircuts to mental health and medical support, for people who are homeless.

“There are so many outstanding stories of community spirit, inspiration and camaraderie, which gives us all hope for 2022 and beyond,” he said

“As a nominee in these awards, you represent so much of what is great about the Sunshine Coast and why it is such an enjoyable and desirable place to live.

“Your efforts help build community vitality and resilience and are an integral part of the social fabric of our region.

“Each one of our nominees has made a difference to our Sunshine Coast in the past 12 months, and I’m sure will continue to do so into the future.”

The award recipients were nominated by the community and selected by a panel of local leaders, including the 2017 Sunshine Coast Australia Day Young Citizen of the Year, Jak Hardy, Angela Lisle (TAFE Queensland), Caroline Campbell (Seven Network) and John Williams (92.7 MixFM).

Mark Ellis is a dedicated advocate and community worker, fighting homelessness on the Sunshine Coast.

Through his role at the Maroochydore Neighbourhood Centre, Mark coordinated the 2019-2021 One Roof Program which provides a range of support and services to almost 10,000 vulnerable people.

He also collaborated with Sunny Street to launch their first medical outreach clinic, which seeks to provide free medical assistance to the vulnerable.

Following the murder of a gentleman who had been sleeping rough, Mark has also helped raise $200,000 for the Coast’s first sleep bus for men, women and children.

James (Jim) Coles is RangeCare’s longest serving volunteer with 27 years to his name.

He has served one Blackall RangeCare Group’s voluntary Management Committee for 14 years, including the past three years as Vice President.

Jim raised funds for renovations to the RangeCare site in Flaxton and raised $460,000 for a new building in 1994.

He remains an active member of the organisation and volunteers at least twice a week in RangeCare’s Op Shop in Mapleton.

Jack is very involved in his school community and his co-curricular activities include being co-founder of the school’s Debate Club, a member of Student Representative Council, a Lion’s Youth of the Year participant and a participant of the University of Melbourne’s Corporate Social Responsibility Board Program.

Jack has been accepted to study a Bachelor of Law and Commerce (Accounting).

Sophie is a Year 11 student at Mountain Creek State High School who strives to be an inspirational role model.

Sophie’s dedication to service and academic excellence is reflected in her many awards and accolades, including the 2020 USC Rise ‘n’ Shine Award and 2020 ADF Future Innovators Award.

Sophie also volunteers for Chaplain pancake breakfast at school each week and was one of 20 ambassadors selected for the 2020-2021 PNG Aus Partnership.

The club has more than 1425 members, with Mooloolaba lifesavers completing 14,000 volunteer patrol hours and performing over 1800 preventative actions and rescues per season, including more than 180 first aids.

The Mooloolaba Nipper Program has more than 430 children per season and Starfish Nippers for children with disabilities.

John has contributed vastly to the arts sector as an artist, art educator, curator, and manager, for more than 30 years.

He worked as an education officer and gallery director for government and corporation, leading innovative gallery facilities and programs, for more than 20 years.

John was Gallery Manager for both Caloundra and Noosa Regional Galleries for eight years.

During that time, he developed the Sunshine Coast Art Prize, curated touring exhibitions featuring local artists and led a team responsible for the situating of Andy Goldsworthy’s ‘Strangler Cairn’ within the Conondale Great Walk.

Toni has worked with Arts Connect, organising Sculpture on the Edge and Sunshine Coast Open Studios and she is currently working on reopening Stevens Street Gallery in Yandina.

She is passionate about creating spaces to appreciate art through events and giving a voice to artists.

Her business, Mother Goose Media, saw the birth of the Kids on the Coast magazine.

She also runs Boxed Up, a business that stocks products from Sunshine Coast local artisans.

Bridie is a dual Paralympic medallist, former captain of the Australian Gliders, USC academic, President of the Suncoast Spinners wheelchair sports club and the Paralympic representative who helped win the Brisbane bid for the 2032 Olympic and Paralympic Games.

Bridie leads by example and inspires those around her to create inclusive sporting opportunities with lasting outcomes.

She is working to ensure that the 2032 Games have a legacy that trickles through for people with a disability into all aspects of life – education, employment, public transport and access to sport.

ECOllaboration (formerly Maroochy Waterwatch) is a not-for-profit community organisation that has been working on conservation projects across the Sunshine Coast for more than 25 years.

They have planted thousands of trees, removed tonnes of weeds from the Coast’s natural areas, eliminated tonnes of rubbish from the Mooloolah and Maroochy Rivers, employed dozens of disadvantaged Sunshine Coast residents and trained them in conservation and land management and taken thousands of water quality samples in waterways across the region.

Through the education of school children, they have created a sense of environmental stewardship across multiple generations.