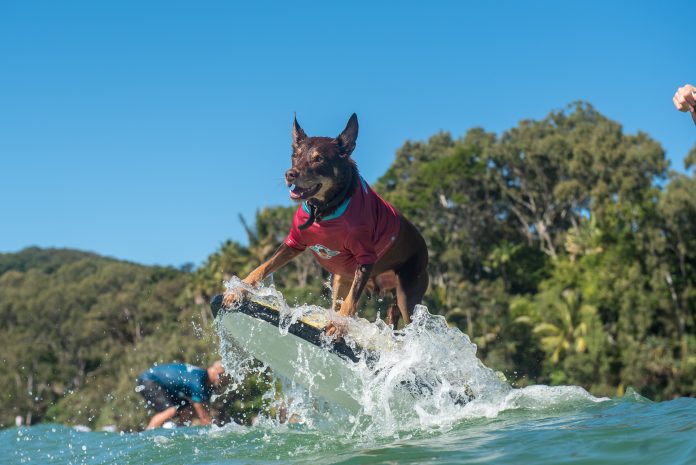 A weird and wonderful event is set to attract thousands of spectators to Noosa Main Beach.

The Noosa Surfing Dog Championships will be held on Saturday, March 5, and it’s expected draw one of the biggest crowds in the event’s 11-year history.

Teams of talented pups and their human companions are ready for the event, which is presented by Forest Glen-based online pet retailer VetShopAustralia.

VetShopAustralia head veterinarian Mark Perissinotto said the beach should be packed with people eager to see surfing dogs in action.

“We had to postpone the 2021 event to May due to COVID and there were state and international border closures but this year everyone is able to make the journey to Noosa to see the dog surfing, so we think there might be an even bigger crowd than usual,” he said via an event press release.

Some decent surf is expected for the event with forecasts showing a solid 1.5m-2m swell running from Friday to Sunday, and decent 1m waves continuing throughout the week.

The dog surfing championship is traditionally the most popular event at the nine-day Noosa Festival of Surfing.

The pooches and their surfing partners will hit the waves to battle it out for the ultimate prize, the Best Wave Award.

The competition, to start at 2.30pm, will feature 11 dogs, accompanied by 15 people, competing in 10 teams.

Some old favourites and some new, young competitors have entered.

They’ll be going nose-to-nose against Huey’s 14-year-old sister Opal and her friend Lily, who will surf with Freddy the Pug.

Back for another crack at the winner’s trophy are Banjo, the ball-obsessed Kelpie, and his owner Chris Oakley.

The largest competitor will be Cooper the Golden Retriever, with owner Jay.

Border Collie Anna will return with owners Zane and Koa, while Poppy the Groodle will surf with owners Michele and Luke.

Kai the Border Collie is back, after a year odd, with owner Zanna.

After making their debut in 2022, Bu the Blue Staffy is back on board with owners Dane and Rio.

Reigning Best Wave champion Pickles will return, but this time she will bring her sister Waffles along for the ride.

They’ll surf with their friend Dan, who is the owner of Sage the acrobatic dog. They will perform incredible tricks for the crowd, before the surfing competition starts.

Rob and his rescue dog Spike will arrive from Melbourne, accompanied by their friend Hank, cat Teddy B Bear and their new dog, Lani.

Rob and Spike recently released a book called Spike Surfs, which told the story of Spike’s journey from adoption to surfing champion.

Dr Perissinotto said the event also provided a platform to remind dog owners to help their dogs lead a healthy and active lifestyle.

The Noosa Surfing Dog Championship will be held at Noosa Main Beach on Saturday, March 5, from 2.30pm.

For more information on the event see Surfing Dog Championships and Noosa Festival of Surfing. The festival will run from March 5 to March 13.