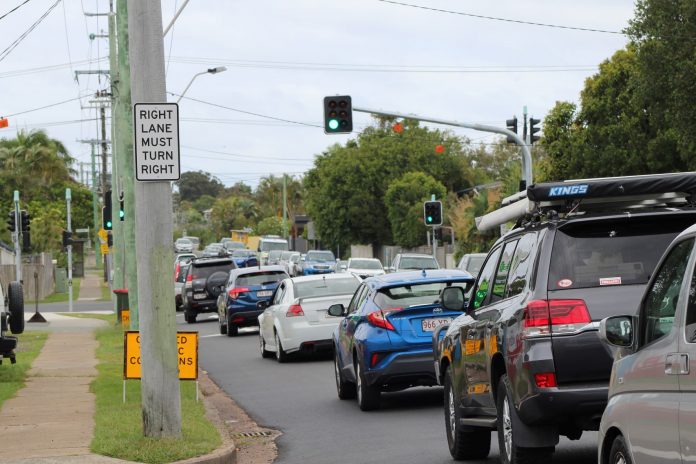 Lane changes heading south at the traffic lights on the corner of Buccleugh and Roderick St, Moffat Beach, have become the talk of the town as they cause delays and confusion.

Vehicles during peak hours are queued from the lights, back over the hill on Elizabeth St, around the Wilson Ave corner and back to the Dicky Beach shops on Beerburrum St, more than 700m away.

Until recently, motorists could turn left to Moffat Beach via Roderick St at the Buccleugh St lights, and use the right-hand lane to turn right into Roderick Street or continue southbound towards Caloundra.

The headaches have been created by the right-hand lane being changed to “right-turn-only”, which locals say is “bizarre” as hardly anyone turned right there.

It is controlled by an arrow at the lights, forcing great volumes of traffic heading to Moffat Beach shops and the surf, or Caloundra beaches and the Central Business District, into the single left lane.

One of the angry motorists caught in the long delays is Currimundi resident Grant Hutson.

Mr Hutson regularly heads south along Buccleugh St to attend doctor and barber appointments and visit friends living in Caloundra, as well as doing business at the Moffat Beach Post Office at Tooway Creek (Lake), but has vowed “not anymore”.

“I got caught the first time last Friday, before they’d actually properly painted the lane markings,” he said.

“I got caught in the right-hand lane. I had to go around the block.

“This morning, I changed my way entirely. I went out to Nicklin Way, down to the roundabout and came into Caloundra from the west because I knew what was coming.

“When I left Caloundra, I came back through those (Buccleugh St) lights and the cars were lined up from the lights, over the top of the hill, around the corner  and into the Dicky Beach shops.

“I don’t know how those businesses are going to go over time because I’m not going to go that way.”

Mr Hutson said that in conversations with other local residents about the problem, they all admitted to rarely seeing cars turning right at the lights into Roderick St. They believed the change was unnecessary and disruptive to through traffic.

His main concern was for Tooway Creek and Moffat Beach businesses.

Moffat Beach Post Office owner Jason Jin was aware of the traffic problems caused by changes at the traffic lights down the road and believed many local residents had contacted Sunshine Coast Council about their concerns.

Customers had problems getting into his and other Tooway Creek businesses on Buccleugh St during those times because of the long line of vehicles blocking a quick entry and exit.

“There used to be no right-turn arrows. You didn’t have to wait for the traffic light. You just waited for the cars and if no car was coming, you turned,” he said.

“Now, because it’s set up for a green light for a right turn, all the cars that want to go straight, they have to merge to the left lane, so that’s causing traffic to queue.”

Bryce Street resident and Make Moffat Shine group member John Stark “bore witness to the line of traffic going back over to Dicky Beach the other day” and believes the frequency of light changes is at fault.

“I don’t have a problem with the set-out of the lights and the road signing,” he said.

“It is the frequency of light changes which is causing the problem. I don’t think they’ve changed it correctly.  If they addressed that in the first instance, the problem may go away.”

Mr Stark said the previous situation was dangerous for people crossing at the lights, and traffic was increasing in the backstreets such as Nottling Street to avoid the lights that had no right-hand turns.

“The intent was good,” he said of the new set of lights.

“A lot of people are saying’, ‘Go back to the way it was’ but I don’t think that’s at all appropriate.”

“We have complained for some time, to the member for this area and council,  about the pedestrian crossing, traffic not waiting for those crossing from Roderick (St), so thought this would be the answer,” she said.

“Unfortunately, they got the turn wrong.”

A Sunshine Coast Council spokesperson said important safety improvements were being undertaken at the intersection and one of the final steps in the upgrade would be reinstating sensors to better manage traffic flow.

“During the past few days, the traffic signals have been operating without sensors, as they had to be removed during the road reseal works,” the spokesperson said.

“The sensors are expected to be reinstated this week, weather permitting.”

The council would continue to monitor traffic flow and optimise traffic signal phasing once the project was completed, they said.

The intersection upgrade was in response to a history of crashes and pedestrian safety concerns.

The spokesperson said the council had distributed construction notifications in late September and mid-October to advise adjacent residents of the work.

Traffic control and signage have been in place to advise motorists of the changed conditions.

The spokesperson said the council thanked motorists for their patience while the upgrade was being completed.