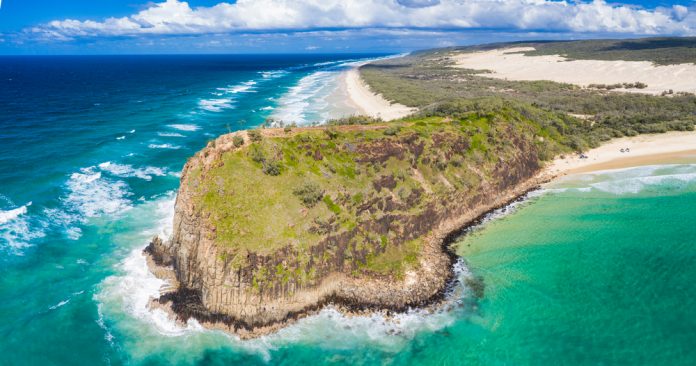 Believe it or not, there was a time when those trying to sell land in now-prized Moffat Beach had to halve prices in a More
More
Opinion

Tourism looks forward to something big this Xmas

The Australian Prudential Regulation Authority’s (APRA) change in the assessment interest rate has sent shivers through parts of the property industry. However, in reality, it More
More

Celebrations have followed an “incredibly important” step that recognises the cultural heritage, connection to country and traditional owners of Butchulla land, Fraser Island.

The renaming of the world’s largest sand island to K’gari was formally adopted at the recent 44th session of the World Heritage Committee and is a major milestone in a long running campaign by the region’s traditional owners.

“Of course, the renaming is incredibly important to Butchulla people,” she said.

“It recognises that it is our country, and that our sovereignty still exists today.

“All of Queensland, and Australia, has strong Indigenous heritage. Re-adopting Indigenous place names is one part of recognising that.”

K’gari is the Butchulla people’s name for the island, which translates to “paradise” and recognises the island as just that – a paradise – rather than the dark history behind its colonial name.

“The Butchulla people have been campaigning for years to change the name,” Ms Gould said.

“The name Fraser Island is a tribute to Eliza Fraser — a woman whose narrative directly led to the massacre and dispossession of the Butchulla people.

“A word meaning paradise in Butchulla language is a much more fitting name for such an iconic place.”

Local journalists supporting local people. Help keep independent and fair Sunshine Coast news and opinion coming by subscribing to our free daily news feed. All it requires is your name and email. See SUBSCRIBE at the top of this article

“On behalf of the Butchulla people we pay respect to our Elders who are no longer with us to hear this news,” Ms Doolan said.

“Today is a time of reflection for our people and for those souls who long advocated for such a meaningful change over such a lengthy period of time.

“BNTAC also looks forward to a positive future relationship with the Department of Environment and Science and the State of Queensland, to promote reconciliation by working collaboratively in partnership.”

Queensland Environment Minister Meaghan Scanlon said this step built on the name change of the Island’s national park to K’gari (Fraser Island) section of the Great Sandy National Park, which was declared in 2017.

“That was the first step in the process,” Ms Scanlon said.

“I look forward to working with the Butchulla people, stakeholders and the community to progress the necessary steps now for the formal renaming of the entire island to K’gari.

“Other national parks have been renamed in consultation with Traditional Owners and the community including Naree Budjong Djara National Park on Minjerribah (North Stradbroke Island) and Gheebulum Kunungai National Park Mulgumpin (Moreton Island), both of which are home to the Quandamooka people.”

“With the support of the Butchulla people, we have been calling the island K’gari for some time now,” Mr Hay said.

“This change couldn’t have come at a better time as we emerge from Covid and work to attract domestic and international travellers back to the region and the island.

“There has never been a truer word spoken — K’gari really is paradise.”

As Australia edges towards a national 80 per cent COVID-19 vaccination rate, preparations are being made for the booster program. The latest figures show 73.4 More
More
News

Help this vital charity and you could win a dazzling diamond

A landmark construction in a "reinvented" Nambour is hoping to attract buyers looking west as the coastal strip overheats and drives people out. Pre-construction has More
More