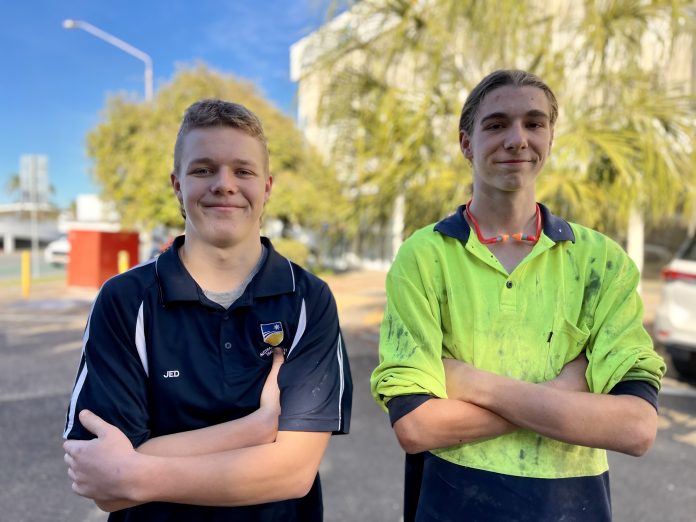 Four Sunshine Coast teenagers with promising careers in trades are competing for the title of national champion as they test their skills against more than 400 competitors.

Currently in Year 12 at Maroochydore’s Australian Industry Trade College (AITC), the young men are representing Queensland at the 2021 WorldSkills Australia National Championships, in which competitors test their skills in simulated work environments.

Fletcher Patterson and Corey Hobbs, both 17, are representing Queensland in carpentry, while 18-year-old Jedidiah Robertson is competing in plumbing, and 17-year-old Jake Marlow in automotive.

Jedidiah has been working hard on his skills and said he had a basic rundown of the systems he would be building on the day.

“I’ve had a look at the fittings, the different types of pipe and the joins we’re going to be using,” he said.

“I’ve been brushing up my skills using them. My boss from Need-A-Plumber is helping me use the same fittings and I’m doing work specifically that relates to the competition, which will be a great help.”

Corey said he was looking forward to teaming up other carpenters in the Queensland team.

“We can help each other out with our knowledge and what we know about the trade. We will be able to support each other and give each other advice,” he said.

The competition, which was due to be held in Perth from August 26 to 28, has been reformatted due to interstate borders closures, and is currently underway with the boys competing from TAFE Queensland’s Alexandra Hills campus in Brisbane.

The national gold, silver and bronze medallists will be announced at the end of the competition.

AITC Head of Industry Education Eliza Lane said the championships provided an “incredible opportunity” for young people to celebrate their developed skillsets and compete in their industry skill area.

“It’s an experience of a lifetime where young people will form friendships, showcase their passion and develop new networks that will extend well into their future,” Ms Lane said.

“In recent weeks our young people have been working hard, honing their skills and preparing for the national competition.”

WorldSkills Australia Queensland Manager Eric Davis has been involved with the Championships since 2003 and said he was once again excited to see the Queensland team test their skills against Australia’s best.

“Each year, the championships provide competitors with the opportunity to practice and perfect their skill area in a supportive environment then test their skills against their industry peers,” Mr Davis said.

“Participating also provides competitors with the chance to develop important relationships within their industry Australia-wide.”

“By the end of the championships, competitors are more confident in themselves and have a greater understanding of their skill area and industry.

“Most importantly they bring this confidence and knowledge back to their workplace to benefit their employers, work colleagues and their industry.”