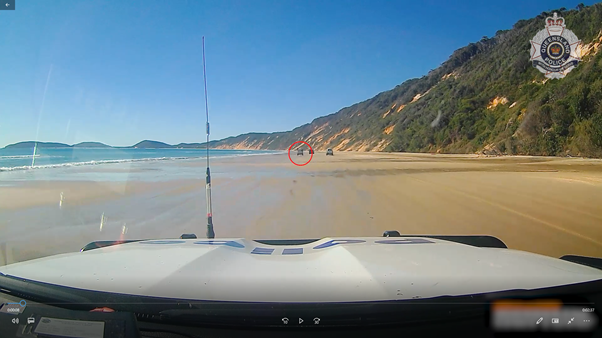 Beach hoons using a makeshift drag strip to race at low tide have been targeted by police.

Officers responded to a number of complaints about dangerous activities along Teewah and Rainbow Beach.

Police attending on Saturday morning located witches’ hats and glow sticks, which formed a course for motorists to speed through, along with alcohol cans and fireworks littered across the beach.

They returned to Teewah on Saturday night and issued Notices to Appear (NTAs) for drink driving, driving without due care and attention and speeding offences.

On Sunday, a 20-year-old male driver and his female passenger were observed by police sitting on the window sills of either side of their vehicle as it travelled along Rainbow Beach.

When questioned, the pair advised police they had been trying to take a “good photo”.

The man was issued with an NTA for dangerous operation of a vehicle, and the 22-year-old passenger also handed a Traffic Infringement Notice (TIN) for failing to wear a seatbelt.

Officers received further complaints from people at campsites nearby who had camera vision of motorists conducting burnouts, resulting in additional infringements notices being issued.

Police action from the weekend:

In addition, police were advised of three vehicle rollovers which, thankfully, did not result in any injures.

Gympie Patrol Inspector Pat Swindells said police continued to urge anyone who may have witnessed dangerous hooning behaviour or have vision of any incidents to come forward.

“Hooning on beaches not only puts the occupants of the vehicle at risk of serious injury, but also the lives of innocent campers,” Inspector Swindells said.

“Families have the right to enjoy our local beaches without fear of anti-social behaviour or vehicles being driven at unnecessary speeds.

“Police will continue to be out in force over coming weekends targeting hooning and will not hesitate to take necessary action against repeat offenders.”