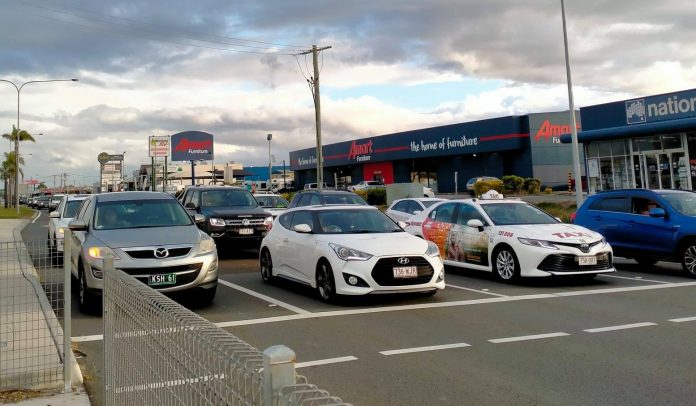 One of the Sunshine Coast’s busiest roads could come to a standstill because of traffic congestion if nothing is done to create a mass public transport alternative, a report has warned.

Traffic on the Nicklin Way, south of the Mooloolah River crossing, is forecast to increase by 62 per cent in some sections (near Kawana Shoppingworld), equating to an extra 30,900 cars a day in the next 20 years to 2041.

One of the worst-affected parts would be near the Sunshine Coast University Hospital, where traffic build-up would be so bad cars could be at a virtual standstill at peak times.

The bumper to bumper traffic would mean car speeds would be 15 per cent lower.

The predictions are outlined in an Options Analysis Paper for a future mass transit system which has been released for public consultation.

The paper shortlists five key mass transit options and considers the housing densities that could be developed to cater for anticipated population growth in the urban coastal corridor.

It’s forecast that an extra 182,000 people will move to the Coast by 2041, pushing the population to 518,000, but Mayor Mark Jamieson said it was likely the Coast would exceed those targets in advance.

With so many extra people – and households owning more than one car – traffic congestion would become a nightmare.

The worst-affected roads would be the Nicklin Way, which is a major transport thoroughfare between Caloundra and Maroochydore, and the already gridlock-plagued Caloundra Road.

“Of the east-west arterials, Caloundra Road stands out as the link with the highest degree of growth with up to 37,900 additional vehicles using this road every day,” the report states.

“The additional traffic on Caloundra Road is more than two additional lanes of traffic per day.”

Steve Irwin Way, approaching Landsborough, would be another major bottleneck.

The report warns that the amount of time Sunshine Coast people would spend in traffic would skyrocket by 308 per cent (from 2016 to 2041) if nothing was done to improve public transport.

“Sustainably accommodating growth on the Sunshine Coast requires investment in a mass transit system that reduced dependence on single-occupant cars and supports dense, compact and mixed-use development,” the paper states.

“Modelling shows that without an attractive, convenient and competitive mass transit system, the urban footprint will expand, and transport costs will increase.”

Ironically, such bad traffic would force people to drive less to avoid the congestion, but would not encourage public transport use unless there was a viable option such as a mass transit system, the report states.

Mayor Mark Jamieson said part of creating a mass transit system was the opportunity for people to live close to the network and not have to own a car.

The Options Analysis Paper includes three “scenarios” for more “higher-density” housing along the transport route – up to six storeys and possibly eight storeys in some areas.

Mayor Jamieson said people could live in apartments and complexes near public transport stations, catch transport to work and not have to drive at all.

“We need to find a way in which we can cater to those (extra) people (moving to the Sunshine Coast,” said Mayor Jamieson.

“Currently in our current town plan we can cater to a number of those in the developments that are already in place.

“But…we’ll need to cater for more than that in the future and as I’ve often said, it will require higher-density options.

“Higher density is different to high rise. But higher-density options where people will be able to live along that transportation corridor.

“Many of them will choose not to even have a motor car because they will have such a reliable service.”

Although housing density and zoning are not part of the scope of the mass transit options analysis, community feedback on these issues will be incorporated as part of the consultation on a new Sunshine Coast town plan.