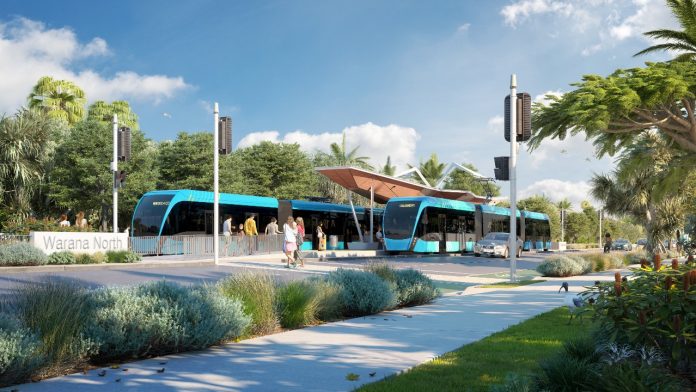 Mayor Mark Jamieson has warned our Sunshine Coast lifestyle is “at risk” of being choked by traffic unless we implement a mass transit system to get people out of cars.

Speaking at the launch of an eight-week public consultation period, Mayor Jamieson said 182,000 more people were going to move to the Coast in the next two decades, adding to the congestion and housing problems.

The Sunshine Coast Council on Wednesday released a 300-plus page Options Analysis Paper which details the “problems and solutions” to future traffic on the Coast as well as scenarios for higher-density development along the transport corridor.

It highlights the need for a mass transit system to get people out of cars, with the Sunshine Coast having the second-highest rate of private car ownership per capita of any local government area in Australia (second to Perth, according to the 2016 Census).

The analysis includes nine options that are being put to the public but shortlists five key mass transit transport solutions — ranging in price from $429 million to $1.553 billion — that have been analysed for their pros, cons and economics.

The report also looks at housing density and spread within the public transport corridor and offers three scenarios on how to accommodate growth with different levels of housing density along the route (more detail below).

Mayor Jamieson urged the community to get involved in the public consultation phase and give feedback and ideas on how to “make your way” around the Coast.

The mayor said planning ahead was vital to protecting the lifestyle people want.

“We must be vigilant in ensuring our lifestyle is maintained. Right now, that’s at some risk,” he said.

“Our major road networks are experiencing significant congestion now, and that will only get worse if nothing changes in the way that people move around on the Sunshine Coast.

“If we want to protect our lifestyle and enable local residents to get around more efficiently, then we cannot bury our heads in the sand and say we don’t want to change anything.

“That’s why getting an integrated, efficient, reliable and sustainable public transport network in place is so vital for the future of our region.”

The paper recommends five favoured options for stage one of the project between Maroochydore and Sunshine Coast University Hospital, potentially operating from 2027.

The remaining four options are considered “business as usual” – such as doing nothing or upgrading the existing bus network – as they do not encourage uptake of public transport.

None of the options outline the final detailed route or proposed alignment which are not part of this stage of the process and would be determined once a preferred mass transit system was chosen.

In providing an overview of the report, council’s urban growth program director James Coutts said 85 per cent of local people’s daily trips were undertaken by car and 90 per cent of those trips never left the Sunshine Coast area.

Mr Coutts said only 5 per cent of people on the Sunshine Coast with jobs travelled to Brisbane for work, meaning the overwhelming majority of residents were driving to work locally.

In terms of transport priorities, he said a localised mass transit system in the busiest areas of the Coast was the first priority above a heavy rail connection from Maroochydore to Beerwah known as CAMCOS.

He said the mass transit system had catchment had a catchment area of 66,000 people. By comparison, CAMCOS’s catchment area was only one-fifth of that because it was focused on the periphery.

Mayor Jamieson said he wanted to correct a major “mistruth” that been “perpetrated on the community” that light rail was the only option.

“We are looking for the best possible solution for our region and our communities, whatever that might be as technologies in this area are changing all the time,” he said.

“Our council has not made any decision on which option it should be. We are in fact a long way from that which is why we are seeking feedback from our community.”

The Options Analysis paper looks at how to accommodate all the extra people expected to move to the Coast with proposals for higher-density development along the mass transit and coastal corridors:

Deputy mayor Rick Baberowski said the consultation period would include community events and activities where people could speak directly with the council and ask questions.

The first will be held at Kawana Farmers Markets on Saturday and more are scheduled on the Sunshine Coast Council’s website.

The outcomes of the community and stakeholder feedback about the mass transit options will inform the final Mass Transit Options Analysis report, which will be considered by council later this year before providing a recommendation to the State Government.