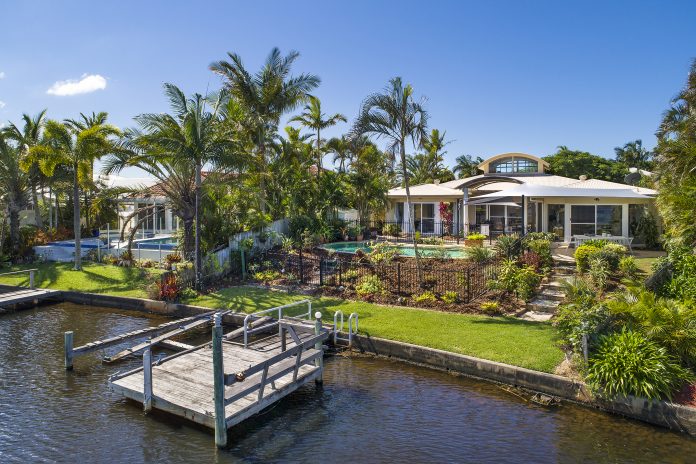 You know the national property spotlight is shining brightly on the region when buyers are prepared to pay more than $3.4 million for what they consider to be a “knockdown’’.

The sale at auction of a spacious five-bedroom, four-bathroom waterfront home at 35 The Peninsula set a new benchmark for Noosa Waters and also solidified the new entry point for this prestigious suburb.

Set on a large 891m2 block with 15m of water frontage, it has its own private jetty, high ceilings, pool, “bespoke features’’ and a separate granny flat, or guest quarters, with ensuite.

Adrian Reed and the team at Reed & Co received considerable interest and five buyers rallied at midday Wednesday for the on-site auction.

Bidding was strong and consistent until two parties remained, settling the score for $3,435,000 – an impressive result for a home that, in the eyes of the buyers, was a ‘knockdown’.

Adrian and the team had little time to celebrate with 7 Seahorse Place, Noosa Waters, being auctioned just an hour later.

Buoyed with the underbidders from the previous auction, the negotiations launched easily. Bidding pushed past the reserve and reached its zenith at $3,990,000 – just shy of $4 million.

From the Noosa dress circle to the farming heart of the region, there were some interesting auctions over the past week.

After being in the family for a century, 59 and 75 Youngs Road, Glass House Mountains, was brought to the market by Barb Banks and Rob Keam.

Previously part of a larger growing enterprise, the now eight-hectare property (pictured below) is vibrant with macadamia trees, pineapples, sheds, homes and views to Mt Tibrogargan. 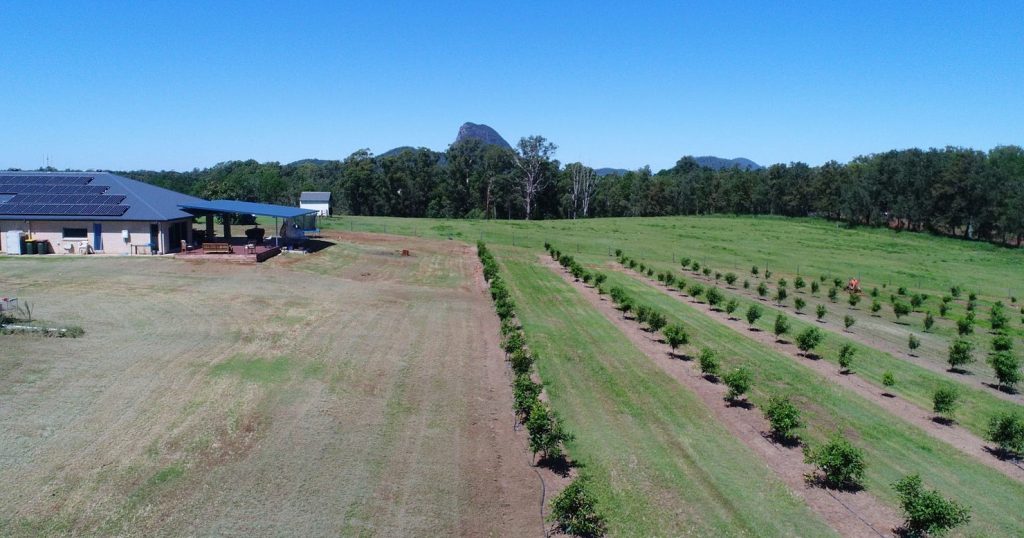 It went to auction on Friday at 10am and with a crowd that looked like a pineapple growers’ convention watching on, we were out of the gates with an offer of $1.8m. Over the course of the next 50 minutes we finally came to an agreement at $2,180,000, selling to a family relocating from Rockhampton.

Relative newcomers, but seemingly old hats at the agency game, Bec and Pete from Coronis, had great success in the Mooloolaba unit market this week.

First up was 4/17 Akeringa Place. The Wednesday 4pm booking proved no challenge for the buyers as they streamed through and settled in for the public negotiation. Selling for a very heathy $450,000, the seller was delighted with the outcome.

Just 24 hours later, 1/32 Kalinda Avenue was offered to the market. The three-level town home was a two-bedroom, end apartment with a large two-car tandem garage. Seven registered bidders fought it out right until the end where it sold for $558,000.

Originally purchased off the plan in 1985, 8/9 Barbados Crescent, Noosaville is an amazing riverfront apartment. The aptly named ‘Driftwood’ kicked Saturday off with a bang.

With Rebekah Offermann at the helm and 10 buyers in the running, the stage was perfect to ensure that after 36 years we would allow the market to do its very best to secure the best return. That’s exactly what happened when, after what seemed like hundreds of bids, the property was sold for $2,855,000.

Next up and with the under-bidders in tow we headed next door to 6/16 Barbados Crescent, Noosaville, known to the locals as ‘Noosa Haven’.

The property was about to be the beneficiary of the amplified buyer emotion of FOMO. All the under bidders from the previous auction dug even deeper determined not to miss out.

Eliza Coppin and the team at Tom Offermann were fielding phone bidders from all over the country until the final bid was placed at $2,640,000, where the property was sold.

So we had some interesting results with our auction data this week. The buyers proved to be very selective with their purchasing decisions and they either showed up en masse, or not at all.

This suggests buyers are becoming quite discerning and are looking to ‘cherry pick’ the great properties available. We are not suggesting a change in the market,  but it has taken a breather this week and auction clearance is back to a still very respectable 60%.

Gordon Macdonald, founder of The Auction Group, has been calling auctions on the Coast for more than a decade after an earlier career in real estate sales. His   sunshinecoastnews.com.au column is compulsory reading for anyone interested in the hottest sales and latest tales from the property frontline.