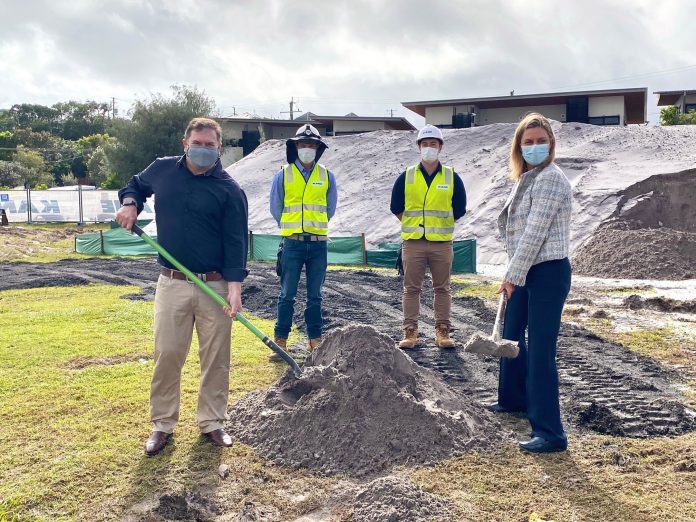 Civil works have begun at the site of the $3 million Rufous St Community House project at Peregian Beach.

Contractor Kane Constructions has earmarked a completion date of late this year for the multi-use facility.

Noosa Mayor Clare Stewart said the legacy project would be a valuable addition to the Peregian Beach community and was part of a $10 million investment into the Rufous Street precinct.

“It will be a facility that many different groups across the shire will enjoy and also help foster connections within the community,” she said.

Cr Stewart and Federal Member for Wide Bay and Deputy Speaker of the House of Representatives, Llew O’Brien, inspected the progress of the civil works.

Mr O’Brien said the Coalition Government committed $2,550,179 towards Stage 3 of the Rufous Street Masterplan through the Building Better Regions Fund.

“The Rufous Street Community House is a landmark project that will provide world-class facilities to meet the needs of its growing community,” Mr O’Brien said.

“This vibrant space will build on Noosa’s reputation as a centre for innovation, creativity and technology, attracting new businesses and diversifying the local economy.”

Kane Constructions Regional Manager Mark Grimsey said workers were excited to be part of such a significant piece of community infrastructure.

“We really enjoy delivering quality buildings that have such a strong connection to the community,” he said.

The new community house design has been developed in conjunction with Bark Design Architects, the Peregian Beach Community House Association and other stakeholders.

“The facility will provide greater flexibility in meeting the demand for hiring space and we hope it will become a central focus of Peregian Beach,” he said.

Rufous Street stage three comprises a Community House with an increased number of hire/meeting rooms complemented by a green space of 4000m2, with sculptured gardens, a play area, winding footpaths and grassed areas.

“The Digital Hub growth has been fantastic and this expansion and further activation of the site provides more opportunities to foster the digital economy in Noosa,” she said.

“It’s so exciting for our shire and another clear example of what we can achieve in collaboration with the community and the Australian Government.”