Auction action: McDonalds at Minyama sells for $7.1m in weekend of high bidding 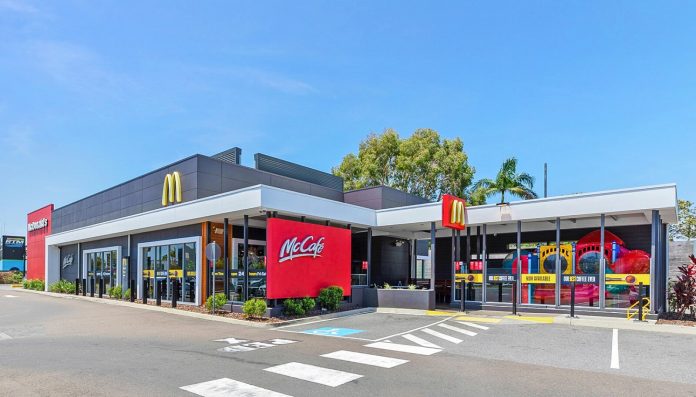 The steaks were high as bidders rivalled at auction for a prime McDonalds property on the Nicklin Way which sold for $7.1 million.

The sale of 18 Nicklin Way, Minyama, was one of the more talked about auctions this week

The 2,795m2 site, home to the well-established ‘Maccas’ is one of the premium commercial holdings on the Sunshine Coast.

Attracting 15 registered bidders from all over the country, marketing agents Nick Dowling, Daniel Vella and the team at Colliers International Sunshine Coast fielded the first bid at $4 million.

The next two bids raised the steaks (or should I say burgers) to $6 million; two more proceed to $6.5 million.

From there it was a quick negotiation until both parties gave us the green light at $7.1 million where the property was sold. McHappy meals all round.

The Sunshine Coast had 35 auctions last week and the clearance rate was right in line with the national average which is achieving an 84 per cent sold rate.

Highlighting the phenomenal capital growth of Sunrise Beach was the sale of 1/39 Tingira Crescent.

Reappointed, in a new market the sophisticated home attracted a stable of well-healed buyers on auction day.

After what felt like 1000 bids the property sold for $3.71 million, giving the seller $1.11 million reasons to smile.

5 Murray Pine Court, Buderim is a property that’s right in the sweet spot of a big portion of buyers — family friendly, great schools, good-sized yard, scope to put your own stamp on the home.

Bevan Horsnell, Brendan Southey and the team at Prime Property were smashed with enquiry and on auction day produced ten registered bidders.

This auction took a life of its own when the market just took over and started bidding without me saying a word.

Back and forth they were yelling out the bids from across the lawn. Only when the bidding slowed I would pipe back up and encourage them on. Eventually the bidding reached its climax at $773,500.

Mount Coolum continues to be a magnet for young families. The mountain suburb still offers great value for its proximity to the beach.

Drawing eight registered bidders the property was eventually snapped up for $707,000.

Brad Milton and the team at That Place Property were ecstatic with the sale.

16 Alkira Street, Maroochydore marketed by Mitch Semple from C21 on Duporth, made short work of the riverside address at 5pm Saturday afternoon.

It was such a great scene, neighbours with drinks in their hand, kids playing street basketball, the lorikeets chatting down on Bradman.

Four registered bidders wanting a slice of the action turned on the heat with solid bidding right up to $745,000 where the property was sold.

This week heading into the Easter long weekend there will be less auctions however if you want your fix feel free to join us at: