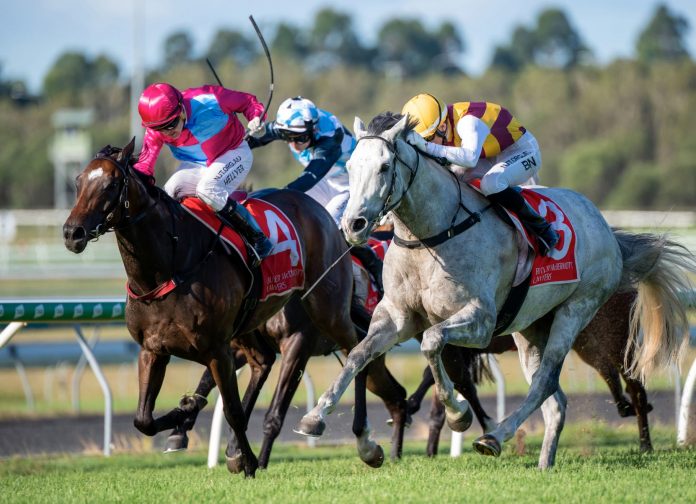 Beachgoers at Alexandra Headland will be glad to know they have the two best lifesavers in the country on hand. Brad Doughan and Michael White More
More
Sport

For more than half her life, Stephanie Welsh has been on the run. The 19-year-old has a need for speed, whether it be on the More
More
News

Work is starting on a $8.9 million new synthetic track project at the Sunshine Coast Turf Club, which is one of the busiest training centres in the State.

“Corbould Park is one of Queensland’s busiest training centres, as well as a key racing venue,” she said.

“Replacing the old surface with the latest technology, along with irrigation and drainage works, will be a major boost for racing and training in the south-east corner.

“Once the new track is in, the project will deliver increased commercial returns to the club and industry and improved racing and training.”

The synthetic track upgrade is co-funded via the Queensland Government, Racing Queensland and the Sunshine Coast Turf Club.

“The track will provide our trainers with first-class training facilities and security for racing, being able to race in all weather conditions,” he said.

RQ CEO Brendan Parnell said the benefits of the project would extend beyond the Sunshine Coast.

“Corbould Park is one of the busiest training centres in Queensland with around 400 horses utilising the tracks every day,” Mr Parnell said.

“Technology has advanced rapidly since the original synthetic track was laid, and in the near future, the Sunshine Coast will boast a surface that will provide enhanced training facilities, along with greater flexibility in race scheduling.”

Work is starting on the $8.9 million Polytrack, which will be a significant upgrade on the cushion one installed 13 years ago.

Funded by the Queensland Government, Racing Queensland and Sunshine Coast Turf Club, the project is expected to take about nine months.

Local racing connections are delighted about the upgrade at Caloundra, where about 400 horses train daily and meetings are held about once a week.

“The new Polytrack is going to have some great benefits for us here at Caloundra,” McCall said.

“Being an all-weather track, it’s great for is, because we get plenty of water here and we also get some hot weather as well, so this will be a nice consistent surface for us.”

McCall said the current synthetic track was still serviceable, but it was dated.

“When it initially went in it was a really great surface … and we still don’t have a lot of trouble with it, but you can see it’s getting old and tired and it definitely needs re-doing.”

She said the new surface would boost local everyone in the industry.

“Weather plays a big role in all tracks,” she said.

“If it’s grass it gets churned up with horses going over it and with the amount of rainfall, we can get here in a day you wouldn’t be able to use a grass track sometimes.”

“It creates an even surface. The synthetic track is very consistent, very true for horses and that’s key in maintaining soundness (in the horses).

“Their bodies get used to it. They’re not hitting holes or soft spots.”

She said they should be able to train every day on the track, while more trials should also be held on it.

“I think everyone’s going to benefit from it.

“And the owners know they’re getting an A1 facility.

McCall said Corbould Park was in great shape, with its other tracks, stables and amenities.

“The place is beautiful, with the tracks and stables and this (synthetic track) will add to it.”

McCall knows a bit about race tracks having worked at Sunshine Coast Turf Club as a racing assistant when she was younger.

She’s since emerged as one of the region’s leading trainer, claiming victory in the state’s most famous race, the Stradbroke Handicap, in 2014 with River Lad.

The Australian Surf Life Saving Championships, currently being staged on the Sunshine Coast, boasts a storied 105-year history of unique events. Among those dropped from More
More