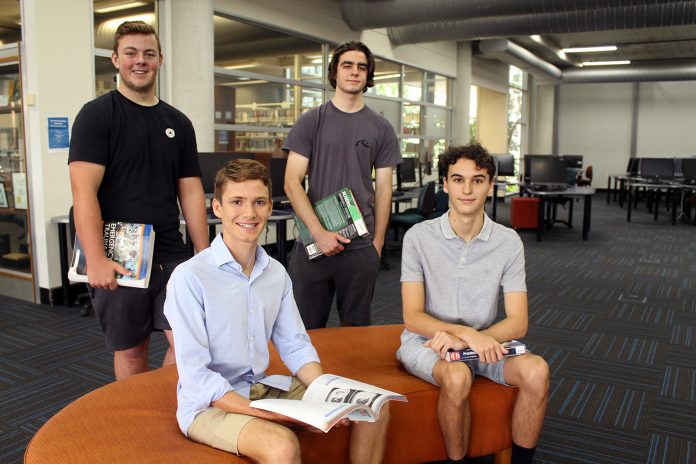 USC will soon become a hive of study activity for four high-achieving Sunshine Coast school leavers, including one who will juggle two homegrown honey businesses.

Buderim beekeeper Justin Holland will join Joshua Hudson, also of Buderim, Alexander Hessey-Tenny of Castaways Beach, Nick Harman of Kawana and 16 other school leavers from across the country who gained positions in USC’s highly competitive Bachelor of Medical Science for 2021.

The four locals are looking forward to studying to become doctors while living in their own region, with all the geographic, financial and social conveniences that entails.

“Studying on campus so close to my home means I’ll have time to do the things I love such as managing my honey businesses, going to the beach and fishing,” said Matthew Flinders Anglican College 2020 Dux Justin, 18, who gained the highest possible ATAR of 99.95.

“More importantly, I will have more time to prioritise my studies than if I studied elsewhere, and smaller classes will mean more one-on-one interaction with my lecturers and peers.

“From a young age, I have dreamt of becoming a surgeon. I was referred to the USC degree by family friends who are doctors and I worked towards this since the end of Year 10.”

Justin founded Buderim Blossom Honey with his brother Karl when they were 14 years old and the twins still operate it from the family’s acreage properties.

“Our second business is called CommuniBee, which aims to preserve honey bee populations through selling hives to beginner beekeepers, providing local honey to communities and donating some revenue to a not-for-profit organisation addressing bee decline,” he said.

The idea won them first prize of $10,000 in the Sunshine Coast 2021 Generation Innovation Challenge.

Siena Catholic College Dux Joshua Hudson, whose international accreditation as a basketball statistician allows him to record game-day data for the NBL, said he was elated to be studying the Bachelor of Medical Science.

“My desire to become a doctor stems from the intrinsic empathy I have to help others through pain or hardship,” said the 18-year-old who gained an ATAR of 99.90.

“I chose the USC degree as it offers provisional direct entry into the Griffith University Doctor of Medicine program at Sunshine Coast University Hospital, providing an accessible pathway for a career in medicine.”

Eighteen-year-old Alexander Hessey-Tenny, who excelled in rugby as well as academia with an ATAR of 99.60 at Sunshine Coast Grammar School, said he was motivated to make his career his passion.

With his father in the financial industry, Alexander grew up travelling the United Kingdom, Middle East and Sydney.

“I applied to USC for its highly regarded medical program in the perfect location,” he said.

“I want a lifelong career that is challenging and constantly evolving and forces me to be the best I can be.”

Minyama’s Nick Harman, 18, who earned an ATAR of 99.60 at Kawana Waters State College, said he chose the USC degree to stay in his home region while studying to become a doctor.

He and the others will be among 5000 new students to start studying this semester at USC, which has campuses at Moreton Bay, Caboolture, Sunshine Coast, Gympie and Fraser Coast.

Applications are open to study at USC from Semester 1, starting March 1.