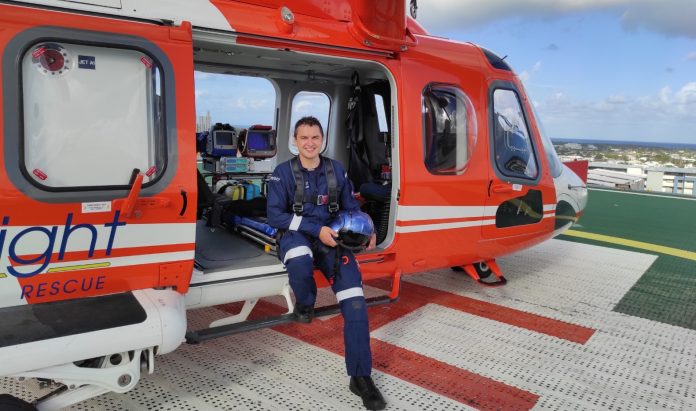 One of the new recruits, Dr Faraaz de Belder, has a wealth of experience helping people at emergency scenes, in the UK.

He’s worked as a critical care doctor with an ambulance service, volunteered with a police force and served in the Army Reserves.

He’s excited to be combining these roles, as a critical care doctor, in the air.

“I think it’s going to be a completely different working environment, obviously there’s much closer confines in terms of your environment, you’ve got to take into account travelling distances, weather, as well as some of the more unique experiences that are available, like winching from an aircraft,” Dr de Belder said.

“I’m looking forward to helping out Queenslanders and taking care of the most critically unwell patients out there, I think it’s a really rewarding job,” he said.

“It’s the cutting edge of pre-hospital medicine, in a system that’s got really good clinical governance and a really good team behind it.”

The mission involved transferring a sick patient from Hervey Bay to the Sunshine Coast University Hospital.

Before taking to the skies, the new doctors went through LifeFlight’s challenging aeromedical training program.

“The training package is probably on par with some of the world’s leading pre-hospital retrieval courses,” Dr de Belder said.

In a first for the aeromedical service, the Retrieval Registrars performed their aviation and winch training on the new Land Rover LifeFlight Special Mission helicopter.

This enabled the Special Mission helicopter crew to be ready to go above and beyond, by further refining their skills and continuing their training regime, while allowing the fleet of RACQ LifeFlight Rescue community helicopters to remain online and available for life-saving missions.

“Being able to winch doctors to scenes means we can take advanced care to anyone in need, even if they’re in hard to access locations,” RACQ LifeFlight Rescue Chief Aircrew Officer Simon Gray said.

“For doctors who have never been near a helicopter before, winching can seem very confrontational at first, but we gradually build up the training, so they grasp it fairly quickly.”

The doctors also learnt how to save their own lives, in the unlikely event of a helicopter crashing into water.

The trainees were literally thrown in the deep end, during Helicopter Underwater Escape Training.

“It’s highly unlikely an aircraft will crash in the water, whether that’s an ocean, lake or dam, but these doctors need to know how to mentally and physically orientate themselves whilst underwater, in the event that it does happen,” LifeFlight Training Academy Sea Survival Instructor Jenevieve Peacock said.

The Retrieval Registrars learnt specific pre-hospital and retrieval clinical skills and put them into practice in high-pressure scenarios at the Queensland Combined Emergency Services Academy at Whyte Island, in Brisbane.

The majority of the RACQ LifeFlight Rescue Critical Care Doctors’ work is performed on behalf of Queensland Health, under a ten-year service agreement.