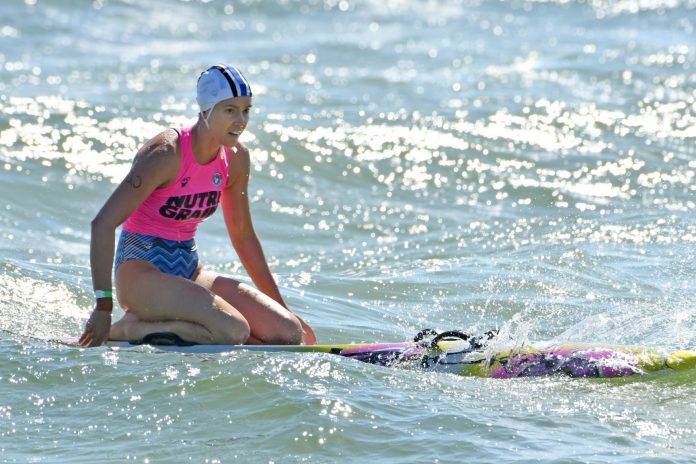 Maroochydore surf lifesaver Ella Brown has been praised for rescuing a fellow competitor during the trials for the Kellogg’s Nutri-Grain Ironwoman Series at Kingscliff.

The 24-year-old sacrificed her race to come to the aid of Lily O’Sullivan, from Burleigh Heads Mowbray Park, who is believed to have suffered an accidental kick to the head.

“Just as I was approaching the first swim can, that’s when I noticed her drifting off to the side, which I thought looked a little bit odd,” Brown said.

“As I turned the can, I wanted to make sure she was okay, and I wanted to check on her. I yelled out ‘are you okay?’ and she didn’t respond and then I realised she was actually unconscious.

“That’s when I put my arms underneath her and I tried to keep her head above the water and I signalled for help.

“The IRB came and took her to shore and midway into shore she started to come to and I tried to reassure her that everything was okay and when we got to shore the first aid officers were able to support her.”

Brown said she did not hesitate to help.

“Her safety and well-being was well above what the race meant at that time.”

She said years of surf lifesaving training “definitely” came to the fore.

“That’s pretty much what our sport is.”

O’Sullivan said she could not thank Ella enough.

“All I remember is getting near the first can with the lead girls in my swim and feeling a pain in my head and the next thing I remember is being in the IRB and Ella telling me that I was going to be okay,” she said.

“I really hate to think what might have happened if Ella didn’t stop, I can’t thank her enough. I am disappointed that it ended my race, but it makes me hungrier to get back out there and aim for next year’s series”.

“She’s obviously done the right thing and good on her for checking back and making sure the girl was okay and all the rest of it. It wasn’t big, it was just wind chop.

“She just did the right thing and good on her for doing it.”

“People’s safety is more important than a race.

“At the end of the day, whether they know each other or not, they’ve got a common bond in what they’re trying to achieve and there’s a fair amount of respect there for each other. I’m enormously proud of her for stopping and doing that but I would expect her to as well, as I would expect someone to do it for her.”

He said he wasn’t surprised Brown was able to handle the situation.

“She’s got a pretty cool head on her. Things don’t rattle her much and she’s managed to stay calm and do that which h is brilliant.”

“Ella Brown’s actions epitomise everything our sport and movement is about,” he said in a SLSA news release.

“Ella sacrificed her own race to help a fellow competitor in the true spirit of what surf lifesaving is about, she is an outstanding role model and deserves to be acknowledged.”

Brown may have missed her chance to qualify for the Nutri-Grain Series, but she could tackle the Summer of Surf in coming months.

“She raced well during the weekend,” Greig said.

“She’s nowhere near what she’s capable of because she’s been kind of injured on and off for three years.

“But she raced exceptionally well to get into the (trials) final and she knows it’s just a stepping stone back into racing.”