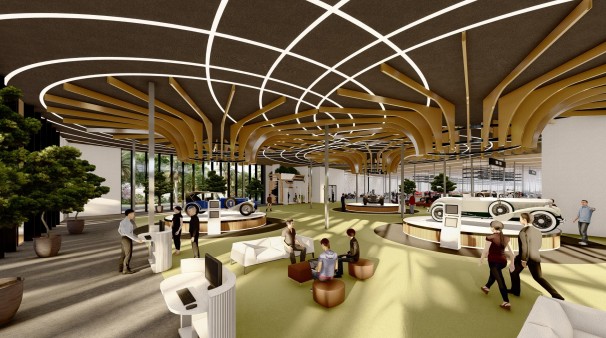 The mining magnate is going back to the future at his Coolum resort, lodging a development application with Sunshine Coast Council to build a mega car museum on the property.

If approved, the new Palmer Auto Museum would be built over the golf resort’s existing driving range, which would mean having to relocate the range to another precinct.

This is likely to face scrutiny from council because the prized 18-hole course is registered under a convent designed to “maintain and protect the playing areas and non-playing areas”.

The mining magnate and political figure first opened his personal car collection, worth millions of the dollars, to the public as the Palmer Motorama Museum in 2013.

The museum was housed in a temporary marquee near the entrance to his Palmersaurus Dinosaur Park, which opened in the same year to much controversy, with moving, noise-producing creatures positioned near resort guest houses and on the golf course.

Mr Palmer has been quietly refurbishing the resort since it went to ruin along with many of the its empty units.

Sunshine Coast News understands $100m will be spent on the renovation rescue and new attractions, including the 623-vehicle display, revitalised town square hoped to become a foodie hub, a wonders of the world showpiece, including a full-size Trevi Fountain and a three-storey carpark.

This would “ensure that all playing and non-playing areas of the golf course are maintained in the overall development intent for the site,” states the development application lodged by Adams and Sparkes notes.

The proposed tourism project is considered impact assessible and would require a material change of use.

The Palmer Motorama Museum contained 100 cars such as an arctic white 1999 Rolls Royce Silver Seraph and ten other Rolls Royces, and a Bugatti Type 57 from the 1930s.

But the proposed new museum would be much bigger.

It would have a total gross floor area of 20,801sqm and a maximum height of 8.4m above the flood hazard allowance.

Earlier this year Mr Palmer rejected as ‘fake news’ a story that he had purchased Adolf Hitler’s bulletproof Mercedes-Benz to feature in a car museum planned for the Gold Coast.

The proposed car parking facility would be a general use car park for “all facets of the Palmer Coolum Resort including the resort, the golf course and the proposed car museum”, states the development application.

It would have a maximum height of 8.5m above the flood hazard allowance.