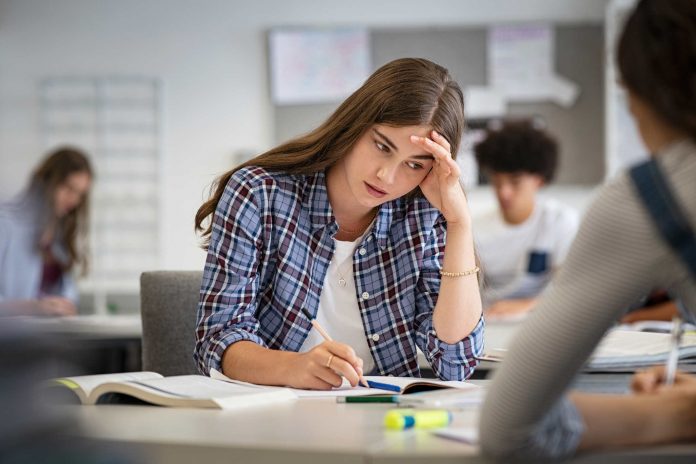 It found that medical imaging of a person’s unique brain signature – much like a fingerprint – has the potential to predict mental health problems.

In the study, published in NeuroImage, researchers at USC’s Thompson Institute tested the uniqueness of adolescent brain activity patterns and whether changes in their brain networks were associated with their mental health symptoms at different times.

Dr Shan, the Head of Neuroimaging Platform at the Thompson Institute, was the lead author of the study.

“We examined if there were unique patterns of neural activity in brain networks that might be associated with emerging troubling, confusing, and frustrating feelings experienced by adolescents, particularly those who may be vulnerable to mental health disorders,” he said.

Dr Shan said the team characterised the development of various brain ‘functional networks’ in young adolescents, from brain scans undertaken every four months on a group of about 70 participants aged 12 to 15.

Each time the scans were taken, the participants also completed questionnaires asking about their feelings during the past 30 days, particularly about their levels of depression and anxiety.

“The findings highlight the importance of longitudinal neuroimaging to monitor mental health in adolescents – at a time when the brain is growing and changing dramatically in both structure and function – and its potential to detect changes before abnormal behaviours present,” Dr Shan said.

“Given the nature of emerging mental illness in young people, a continuous measure of psychological distress is more likely to reveal important links between neurobiological measures and mental illness.”

Mapping changes in the brain

The data was collected as part of the Longitudinal Adolescent Brain Study, which was designed to track changes in the brain during adolescence and to gain a deeper understanding of the factors that impact adolescent mental health.

More than half of all mental health problems are established before the age of 14.

In Australia, one in four young people aged 15 to 19 meet the criteria for having a probable serious mental illness.

The brain signature ‘uniqueness’ was determined by how similar an individual was to themselves at other timepoints, as well as how similar they were to their peers (other participants).

Research had earlier found that bigger is not necessarily better when it comes to the ‘tail’ of a teenager’s brain.

Like a fingerprint, each human brain has a unique profile of signals between different regions of the brain that becomes more individual and specialised as people age.

“The brain works like a symphony orchestra, with activities from different brain areas synchronising in tune to determine our thoughts and behaviour,” Dr Shan said.

Unique whole brain synchronisation was confirmed to exist in 12-year-olds, with 92 perc ent of participants having their own functional connectomes or unique brain ‘fingerprints’.

Further analysis of 13 individual brain networks discovered uniqueness in some networks by the age of 12, while others were still maturing and establishing.

Importantly, the brain network that controls individual ‘cognitive flexibility’ and the ability to handle negative influences, known as the ‘cingulo-opercular network’ (CON) was found to have low uniqueness levels.

“This suggests that it hasn’t quite reached maturation yet and thus provides a biological explanation of the increased vulnerability in young people,” Dr Shan said.

“Combined with the existence of a high level of whole-brain uniqueness, the results suggested that adolescents are capable of engaging these systems to regulate daily behaviour. But they’re not yet doing so in a controlled, sustained, reliable fashion.”

A key finding was that CON uniqueness was significantly and negatively associated with subsequent levels of psychological distress when assessed four months later.

“This relationship reflected the importance of the CON in the mental health of adolescents,” Dr Shan said.

“In future studies, we are planning to disentangle if this reflects a worsening of pre-existing experiences or whether a lag in forming a unique system triggers an increase in psychological distress.”

The networks showing the highest uniqueness were the ‘frontoparietal network,’ which is responsible for immediate information processing, and the ‘default mode network’ which is important for internal cognitive processes, such as thinking about oneself or the future.

The study found no significant difference in whole-brain uniqueness between females and males.

Like this story? Get more just like it direct to your inbox by subscribing to our free daily news feed. All it requires is your name and email. See SUBSCRIBE at the top of this article