Beach volleyball opens up a world of opportunities

Beach volleyball opens up a world of opportunities 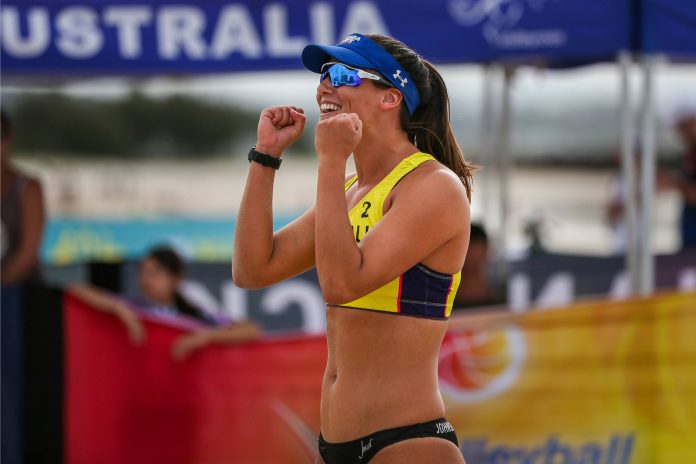 An Australian representative who recently played on beach volleyball’s big stage hopes to inspire the next generation of players in our region.

Georgia Johnson has just competed at the world championships in Rome, where she impressed against a host of stars, including the reigning title-holders.

The Sunshine Coast 23-year-old said it was a privilege to be there.

“To be here, competing against the world’s best is such an honour,” she said.

She hoped her rise through the ranks could motivate youngsters at home.

“Beach volleyball is growing so rapidly in Australia.”

“The work Chico Jones and Sunshine Coast Beach Volleyball are doing for beach volleyball on the Coast is next level.

“There are so many opportunities to play beach volleyball now and seeing so many junior players down at Mooloolaba having a hit is so exciting.

“I find so much enjoyment in seeing other people fall in love with this sport.”

Georgia was paired with Gold Coast’s Alisha Stevens, 19, for the world championships.

She said they had formed a formidable combination.

“We have a large training squad based out of Brisbane and we are able to partner up with different players throughout the year, which gives us so much opportunity to learn more about our game.”

“I love playing with Alisha. She is a fast and high-energy player, who complements my game well.”

Leading into the event, Johnson was eager to test herself.

“We hope to see the hard work we have been putting in back at home for the past few months of our training block, plus see how our game measures up against the world’s best,” she said.

“We are relatively young players in beach volleyball, with some players in the 40s.”

Georgia and Coolum product Caitlin Bettenay have played together, and won, on several occasions since they returned to Australia after several years in the United States college system.

But Australian selectors opted for different combinations at the world championships.

Georgia started playing indoor volleyball at high school in Brisbane and was part of the Queensland Academy of Sport’s volleyball development squad.

She represented Queensland and Australia in indoor and beach volleyball, at a junior level, before receiving a scholarship at Georgia State University.

Georgia played in the NCAA Division 1 competition and earned a Bachelor of Arts, during a four-year stint.

She then returned to Australia and lived on the Sunshine Coast with her parents, training and playing at Mooloolaba.

Georgia started a Bachelor of Engineering and moved to Brisbane, where she joined the national program for beach volleyball and became a coach at Sandstorm Beach Cub.

Georgia said her family was her “biggest support system”.

“No one in my family had played much volleyball before but it doesn’t stop them from cheering on the sidelines and occasionally having a hit in the backyard with me.”

Georgia said she was eager to make an impact at the Olympic Games but added there was more to beach volleyball than that.

“Competing at the Olympics would be the highest honour,” she said.

“We are so grateful to play a sport that allows us to see some beautiful parts of the world and although earning a medal at the Olympics is the goal, enjoying the journey and loving competing is incredibly important to us.”