'Queensland Great': the professor who's on a quest to save one of our most loved animals 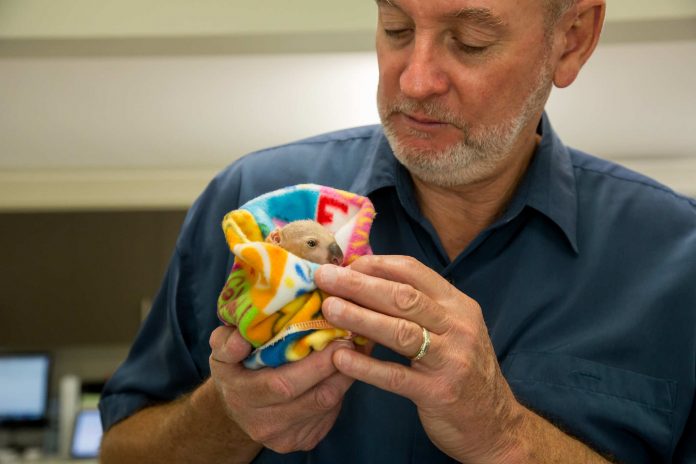 A University of the Sunshine Coast professor has been named a ‘Queensland Great’ for his efforts to save an iconic Australian animal from extinction.

A global expert in chlamydia infections in humans and animals, he was acknowledged at a Queensland Greats Award ceremony at Brisbane City Hall.

The awards recognised the efforts and achievements of extraordinary Queenslanders for their contribution to the history and development of the state.

Professor Timms said it was an “unexpected honour.”

“(The award) demonstrates the benefits of turning research into reality,” he said.

Professor Timms has spearheaded the research needed to understand, and act on, the two major koala disease threats of chlamydia and koala retrovirus.“It shows that if you have the passion and dedication, as well as a quest for knowledge, then it is possible to use the scientific approach to understand enough about real-world challenges and eventually take this to the stage where it can make a real difference,” he said.

Results suggest that the koala chlamydia vaccine, developed trialled and administered by Professor Timms and his team of researchers at USC’s Centre for BioInnovation, could be a game-changer for the koala’s future.“Sadly, Queensland’s koala numbers continue to decline every year,” he said.

“Alongside habitat destruction, disease continues to be one of the icon’s major threats and many wild populations have chlamydial disease levels approaching 30 to 50 per cent.”Up to 1000 wild koalas in South-East Queensland will be given the single-shot vaccine this year, as part of the largest-ever trial to combat the sexually transmitted disease, which can lead to painful urinary tract infections, loss of bladder control, infertility, blindness and death.

“Antibiotics, while the main treatment in humans, cannot be the answer in koalas as these same antibiotics that kill the chlamydia also destroy the animal’s gut microbiome, which it depends on to digest the eucalypt leaves,” he said.The vaccine provides three levels of protection to koalas: reduced infection levels circulating in the population, reduced progression to clinical disease and reversal of existing cases of the disease.Professor Timms is also working with an Australian company and federal veterinary regulator, the Australian Pesticides and Veterinary Medicines Authority, to have the vaccine approved for registration with the hope of an Australian-wide roll-out soon.“Many people have contributed to understanding this nasty chlamydial disease problem in koalas and now, hopefully, we have reached the stage where we have not only a better understanding but a tool – a vaccine – that can help to turn around populations of koalas that might disappear,” he said.“This award helps me raise the flag for all these contributors.  It is yet another example of how Queenslanders are leading the way in tackling Australia’s environmental challenges.”

USC Deputy Vice-Chancellor Professor Ross Young said Professor Timms was a dedicated and tireless researcher who demonstrated the highest of academic standards and commitment to trying to save koalas.

“His passion for koala science involves successfully mentoring the next generation of academics and PhD students working in this sphere, and partnerships with Queensland organisations and other universities who are also committed to koala health, most recently with Australia Zoo,” he said.

Professor Timms’ landmark contributions to chlamydia infections span decades and make him the world authority in the field.

He mentors and guides young researchers in the area of koala infectious disease and supervises a world-class research team at USC that leads international work on all aspects of chlamydial infections, including new diagnostics and treatments for diseases in humans and animals.

In 2018, he was joint leader of the team that produced the first, and only, full genome sequence of the koala which enabled new research including infectious diseases, their unique lactation, ability to detoxify foliage, smell and taste receptors and historical population crashes.

Professor Timms surprised the scientific world in 1996, by pioneering state-of-the-art use of molecular techniques to identify the two chlamydial species infecting koalas – C.pneumoniae and C.pecorum.

His further work on sequencing the genome of C.pneumoniae revealed new evolutionary links to humans and exposed the extent of chlamydial infections in wild koalas.

A second focus area is research into better understanding and the development of a vaccine for the Koala Retrovirus, which along with chlamydia, poses a serious threat to the long-term survival of the marsupial and has been strongly linked to koalas developing cancers such as lymphoma and Leukaemia.

Professor Timms has published more than 300 scientific works in his academic career with almost 700 co-authors.

He has held 17 Australian Research Council and National Health and Medical Research Council Grants to advance this work and progressed five patents since 2011 to ensure his research has impact and practical benefit.