The popular career pathway having its time in the sun

The popular career pathway having its time in the sun 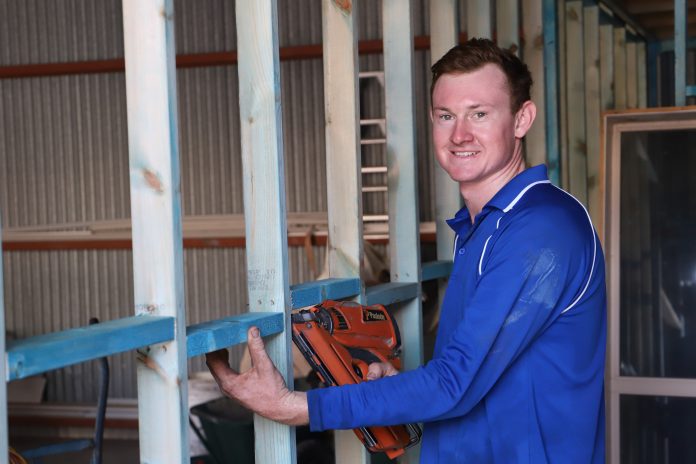 More people are building a career through apprenticeships and traineeships amid a projected surge in demand in the construction industry.

National Centre for Vocational Education Research shows there was an 88.1 per cent increase nationally in commencements in the year ending September 2021.

It comes as the Sunshine Coast had a massive 44 per cent rise in employment of carpenters and joiners over the last 12 months.

Meanwhile, the National Skills Commission is predicting jobs in the construction industry are projected to rise by 5.8 per cent nationwide over the next five years.

Sunshine Coast carpenter Brock Perry, 21, is among the locals making the most of the opportunities, after completing his apprenticeship through TAFE Queensland in 2019.

Brock said that while the industry came with its challenges, he was glad to have chosen this career.

“It can be a lot of hard work in the sun so you have to be committed, but it is extremely rewarding when you see a house go from nothing to being the finished product at the end,” he said.

“Watching your work come together — that’s the best part.”

Brock was drawn to a career in trades early in life, visiting job sites with his electrician father from the age of three.

Inspired by his father’s friends in construction, he commenced an apprenticeship in carpentry with Wes Hall Builders, undertaking his training at TAFE Queensland’s Nambour campus.

“I did work experience at school with one of the builders my ‘old man’ works with and after one week, I loved it,” Brock said.

“I really enjoy the problem solving side of it and the fact you’re not always doing the same thing. In my job, I see builds through from start to finish, doing everything from the footings, slab and trussing, right through to the finishing stage, so you’re always doing something different.”

Brock has since completed a Certificate IV in Building and Construction (Building) through TAFE Queensland with the assistance of Constructions Skills Queensland (CSQ) funding, with the goal of running his own business by the time he is 30.

“I wouldn’t mind trying to get into building Hamptons-style houses. My current boss, who taught me, specialises in building them and I really like the fact they’re so labour intensive and have a heap of great carpentry work involved,” he said.

“Having this qualification will really benefit me when I want to become a builder run my own business, and the funding has saved me from having to pay for it, which is particularly helpful considering I’ve done it at such a young age.”

Brock’s skills were recently recognised on a national stage when he took out the bronze medal in carpentry at the WorldSkills Australia National Championships.

He said he was honoured just to have been selected to compete and showcase his skills.

“One of my TAFE teachers nominated me and I thought it would be an exciting opportunity,” Brock said.

“I honestly didn’t expect to get a medal. I’d never done the type of roofing they were judging us on, so to find out I’d done so well was a surprise.”

The State Government is offering Free Apprenticeships for Under 25s funding across a range of trades. For more information visit tafeqld.edu.au or call 1300 308 233.