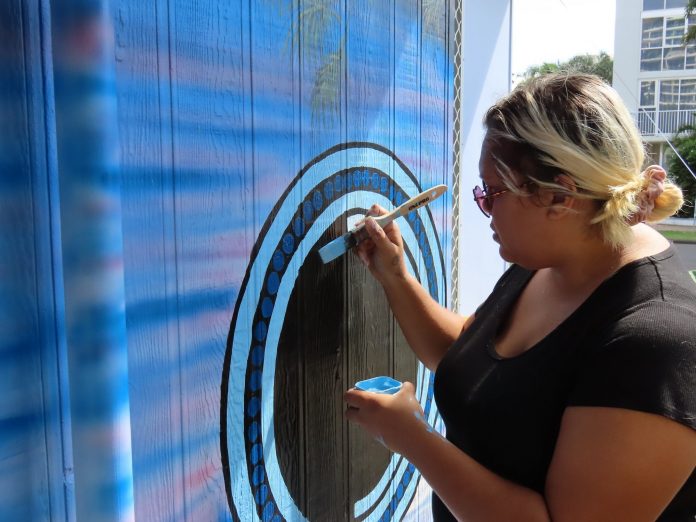 An historic boardrider club has a bold, bright and beachy new look.

The club, founded in the late 1960s, is one of the most enduring in Australia.

Sunshine Coast Council Division 4 Councillor Joe Natoli said the club had grown from a group of Redcliffe surfers heading to the north coast beaches 50 years ago to more than 100 members today.

“Over the years, clubs like this have grown from grommets to veterans participating in club days, state competitions and keeping our community active and outdoors,” he said.

“When council was approached six months ago by long-time member and artist Owen Cavanagh to give the clubhouse a splash of colour, I was on board – metaphorically speaking.

“For the last two weeks I’ve seen glimpses of the mural coming to life thanks to the artistic hands of Owen and his team, including Shauna Hill a local First Nations artist, Steven Bordonaro from Crazy Horse Studios and Rod Tickle from East Coast Airbrushing.

“Each artist brings a different technique and uniqueness to the mural using paintbrushes, sponges and air brushes to share the story.

“This project gives the members and next generation an iconic base, a purpose and, importantly, a community to be part of.”

Mr Cavanagh is leading the project and said he was honoured to develop a concept which told the club’s story during the past 50 years.

“The concept is a story depicting the original landowners and connecting us to country with the art by Shauna,” he said.

“The Kombi van driving up from the northern parts of Brisbane depicts where the boardriders lived and how they would drive up here for competitions on weekends, and you can see the van passing the Glass House Mountains.

“The mural shows an overview of the beach where the club holds all of the competitions in Maroochydore. To the left is Old Woman Island and to the right is Point Cartwright.”

Contemporary Indigenous artist Shauna Hill explained the painting was about sharing the dreamtime story of Maroochydore.

“It’s the traditional story of Maroochy who was a woman back in the day and her partner got killed,” she said.

“They say she turned into a swan and she cried a river of tears and that’s how all the waterways of the Sunshine Coast were made,.

“I’m trying to take that part of the story and show these are her crying tears and the waterways being formed.

“Not many people know about this story, so when they hear about it, the story keeps spreading and that’s kind of the point of Indigenous art.

“We have our history, and we keep it through our artwork and storytelling, so by having it out where people can see it and constantly hear about it, keeps the tradition going.”

Cr Natoli and Mr Cavanagh recognised the club’s important contribution to the community.

“It’s an honour the club chose me to be a part of this mural, to coordinate it and trust me to make it all happen,” Mr Cavanagh said.

“The club is really excited, and the passers-by and general public have been really interested in watching the process develop.”

Stay on top of local stories by subscribing to our free daily news feed. All it requires is your name and email. See SUBSCRIBE at the top of this article.

Cr Natoli said it was vitally important the club was part of the community, for our physical wellbeing and our mental health.

“Council is focused on continuing to develop spaces and places like our recreation playgrounds and fields, our skate parks and our infrastructure and recognises the importance of being outdoors, enjoying nature,” he said.

The project was funded by the Division 4 minor capital works budget, which contributed $12,500 to complete the works.