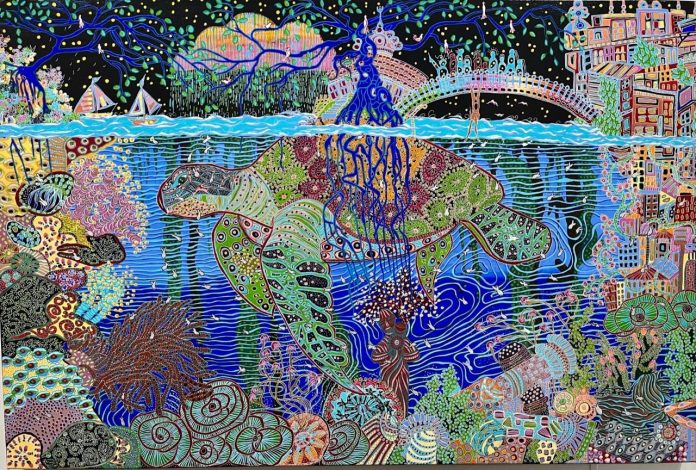 Entitled Rainbow Planet, the much-anticipated launch will take place from 6pm to 9pm Friday, May 20, with Noosa MP Sandy Bolton doing the honours.

Inspired by gallery curator Maxine Stibbe, a finalist in the national ‘Lyn McRea Contemporary Drawing Prize 2021’, the vibrant artworks reflect the theme of all things rainbow at a time of geopolitical unrest.

“I chose the theme after realising that the happiness created from rainbows from children to elders was a beautiful symbolic gesture in times of war and recessions worldwide waging,” she said.

“I feel in times of uncertainty rainbows are a sign of hope, luck and happiness … simple joy of light arced in the sky, adored worldwide for its simplicity and beauty.”

But celebrating the rainbow of multiculturalism with polyculturalism also adds meaningful colour to this collective, inviting viewers with the perspective of embracing a common humanity, which resonates with Ms Stibbe.

“This exhibition is a reference to the polycultural, multicultural genetics of the Australian population. We are a rainbow-blooded people,” she said.

“I grew up in a very multicultural town in West End and when moving to the Noosa Shire I found gorgeous pockets of rainbow-coloured diversity and inclusivity.

“My genetic ancestry has Celtic and Hebrew roots. The art gallery beside me has an Irish-Indigenous Australian. My landlord is German-Australian. I have Māori, Polish and many other peoples from various ancestries exhibit at Max Galleria.

“Two shops up, there’s the beauty salon with staff of Vietnamese origin. The cafe beside me has a New Zealander and a chef who’s originally from the Philippines. There’s a genetically diverse group of people in the one spot.

“And, of course, the rainbow is also a reference to our fabulous LGBTQIA+ community on the Sunshine Coast. So, I believe we really represent the local population like a rainbow.”

Drawing parallels between ancient stories with contemporary dialogue, Ms Stibbe reflects on the mythological representation of this natural phenomena, which plays a significant role in traditional folklore.

“Most cultures love rainbows, having similar mythology,” she said.

“For instance, the Rainbow Serpent of our Australian Traditional Custodians and Quezatacotal, the feathered serpent deity of the Aztecs.

“Also, the Norse had Bifrost, a rainbow bridge, as do the Japanese, with the Floating Bridge of Heaven.

“Buddhists believe the rainbow is the highest state achievable before Nirvana.

“Iris. the Rainbow goddess in Greek Mythology. linked the gods with humanity between heaven and earth.

“The Irish legend is about the pot of gold at the end of the rainbow and we’ve also got Chinese Rainbow Dragons.

“Symbolism is powerful, and the intent of this exhibition is to recognise we are all human regardless of our ideologies, theories, races or genders.”

Contributing artist Jane Parker said she was looking forward to presenting her work at the exhibition, where there is the unique opportunity to collaborate with local artists.

“I’m really excited about this exhibition and grateful that Maxine has this gallery as a community-orientated space for local artists,” she said.

“It’s a venue where people can share views and feel free to exhibit their work. There aren’t very many art galleries like that on the Sunshine Coast at all.

“My work is mainly based in dreams. I see a theme and it’ll be in a dream.

“The rainbow theme to me is an inclusive, positive theme, which incorporates all different elements in harmony with various colours.

“It can also incorporate many different interpretations.

“I know with this exhibition there’s a huge range of ideas about rainbows that invites a lot of different ideas about the world.

Community-focused Ms Stibbe was thrilled to support the colourful art collective in the local community.

“I’m very proud to be representing a local Indigenous Kabi Kabi artist Denva Estreich-Djinda whose work is exquisite, gentle, and timeless,” she said.

“We also have Angela Davies presenting a huge mixed media works made from stamps.

“Kennedy Webb has got the most amazingly intricate, geometric drawing in print form.

“And there’s some stunning photography of the local area by Laurie Brown.

“So, this exhibition has some extraordinary pieces from diverse artists to lift everyone’s spirits.”

Max Galleria is a growing community arts hub of local artists on the Sunshine Coast, with 100 per cent tax deductible art available to ABN holders. It is located at 113 Poinciana Ave, Tewantin.

The exhibition launches May 20 and will run until Saturday, June 11. See Max Galleria and Maxine Stibbe.