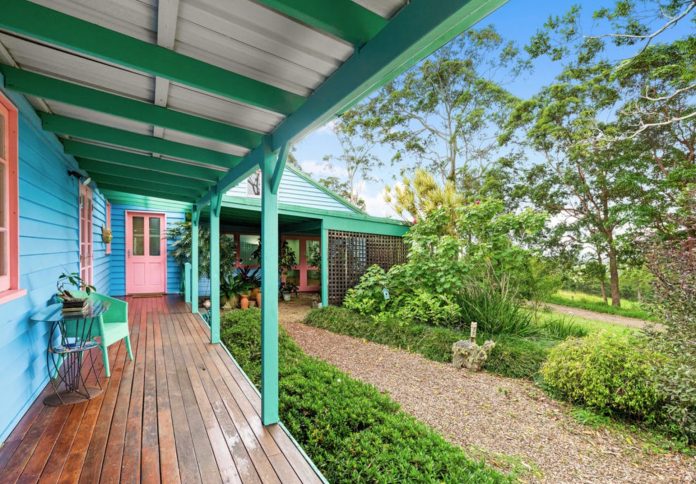 The property, at 19 Cumner Lane, Reesville, which had been the family home of musician Lucy Gallant, changed hands for $1.25 million.

It was originally purchased in 1998 for $195,000 and Define Property agent Amanda Morton told Sunshine Coast News that interest was strong from local and Brisbane buyers.

Full of colour, character and charm, the house – set on 2.4 hectares and nestled in the hills near Maleny – was left to Lucy and her sister Kathryn after their parents, Wendy and Peter, passed away in 2019 and 2020.

It was a Brisbane family who snapped up the property after it went to auction.

“The time had come for the sisters to say goodbye to the home,” Ms Morton said.

“The home has a beautiful feel when you walk inside and the property is full of Australian wildlife like koalas, cockatoos and wallabies.

“A lovely family from Brisbane have bought the property. They wanted to make the tree change from the city and enjoy the coastal lifestyle.

“They plan to live in it as a family home.”

The house is surrounded by rolling lawns and established gardens and features three bedrooms, two bathrooms, an open planned kitchen and a dining area.

The cosy lounge with fireplace leads into the family room, with French doors opening to the veranda and offering panoramic views over the western ranges.

The east wing of the property had previously been used as a yoga studio and includes a kitchenette, bedroom, bathroom and porch.

Scroll down for more images of the bright property

Often touring or travelling, Lucy had spent the past two years living in the home, with its colourful exterior often the backdrop for her social media posts.

She recently shared an image of herself and dog Lola to her nearly 3500 followers with a caption that a change was coming.

“I have been so lucky to spend the last two years living in the hills surrounded by beautiful nature,” the post read.

“It’s been a true blessing! I love looking at the koalas in the trees and the wallabies in the garden.

“Change is in the air and soon I will be on the road again being my normal gypsy self, but I am certainly going to enjoy being here for a little while longer until that time comes.”

Lucy is hailed as one of the most talented indie artists on the scene. The British-born virtuoso plays an array of instruments, including guitar, drums, ukulele, melodica and Cajón – a box-shaped percussion instrument originally from Peru.

She has toured the USA, South and Central America, Europe and Japan, and played the UK’s Glastonbury Festival, Australia’s Woodford Folk Festival, Byron Bay Bluesfest and Splendour in the Grass.

She draws on her Burmese, Russian, Irish and Australian roots to inspire her music.