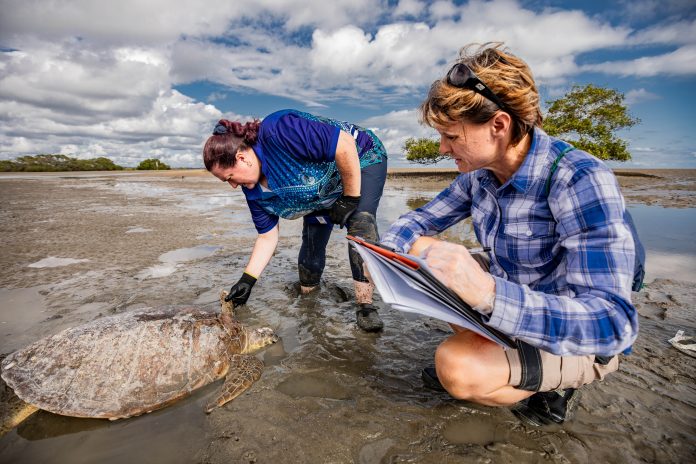 The emergence of a mystery shell-eating disease among turtles is concerning researchers and wildlife rescuers.

A critically-ill green sea turtle, nicknamed Timothy, was one of the latest to be rescued by Turtles in Trouble Rescue – a new partnership between the University of the Sunshine Coast and marine rescue volunteers.

USC Associate Professor of Animal Ecology Kathy Townsend said the marine reptiles were struggling to find food and it was only going to get worse in coming months.

“Sediment washed out from rivers and creeks during the extreme rain events is smothering seagrass beds in flood-impacted areas along the Queensland and NSW coast, reducing the quality and quantity of the turtles’ primary food source,” she said.

“Sea turtles usually spend summer fattening up before the annual winter dieback of seagrass but the floods have compromised this, resulting in the poor health of turtles and more strandings.

Since the floods, more turtles are being found with sections of skin and scales shedding from their carapaces, making parts of their shells soft and sponge-like and sometimes exposing bare bone.

“This is the first time this has been documented in sea turtles, and so far, we believe it is contained to the Wide Bay region,” Dr Townsend said.

“The data being collected by our rescuers, as they respond to callouts about strandings and conduct health checks on basking turtles, is essential to helping our researchers determine what is going on, and how the turtles are being exposed to this disease.”

The group is sharing their findings with Queensland Parks and Wildlife Service and is working with The University of Queensland’s School of Veterinary Science to determine if the disease is viral, bacterial, parasitic or is being caused by pollutants.

Timothy the turtle was first found a month ago at Hervey Bay and was attended to by Turtles in Trouble Rescue co-coordinator Ali Hammond, and members Cassy Ironside and Angela Bell, who are also Diploma of Animal Ecology students at USC’s Fraser Coast campus.

Ms Hammond said, since the floods in February, the group had been swamped with reports of strandings across the Fraser Coast region.

“We had a record 99 call-outs in March (and) more than half had no visible injuries or obvious illness. They were perhaps resting and conserving energy while searching for food,” she said.

“April has been busy so far, with an increase in the number of deceased turtles washing up on beaches.

“Many of the turtles are showing signs of malnourishment but we can’t rescue them all, as we and the wildlife hospitals would be overwhelmed.”

The worst cases are sent to Australia Zoo’s Wildlife Hospital at Beerwah for treatment.

The others are given health checks, with the data shared with USC researchers.

Despite concerns about Timothy’s health, rescuers initially released him after he passed a swim test to check for buoyancy problems.

“Unfortunately, he was found a few weeks later more than 50km away, floating, unable to dive and very unwell,” Ms Hammond said.

“He is now in ICU at the wildlife hospital being treated for floaters syndrome.

He also had sections of eroding shell and small skin lesions.

Bridging the gap between rescue and research

Dr Townsend said that Turtles in Trouble Rescue was an exciting initiative that combined citizen science with USC’s global research expertise on turtles, including the human impacts from micro-plastics and other pollutants.

“This collaboration is providing essential data on turtle health and movements that we can use to gain new insights into the threats facing Australia’s sea turtles,” she said.

Ms Hammond said the formation of Turtles in Trouble Rescue bridged the gap between research and rescue.

“As rescuers we’ve got the boots on the ground, we are getting to know our local turtles and see them on a regular basis and we understand their movements and their health over time,” she said.

“To rescue and rehabilitate one turtle and get it back out into the wild is awesome but to understand the reason why that turtle stranded in the first place and to help mitigate that is incredibly important.”

Turtles in Trouble Rescue is supported by the Queensland Department of Environment and Science.

Anyone who finds a stranded, sick or injured turtle is asked to call the Department’s Marine Stranding Hotline on 1300 130 372.

Help us publish more free articles by subscribing to our daily news feed. All it requires is your name and email. See SUBSCRIBE at the top of this article.