A continuous flow of dreaming: artist shares culture at 'raw and personal' exhibition 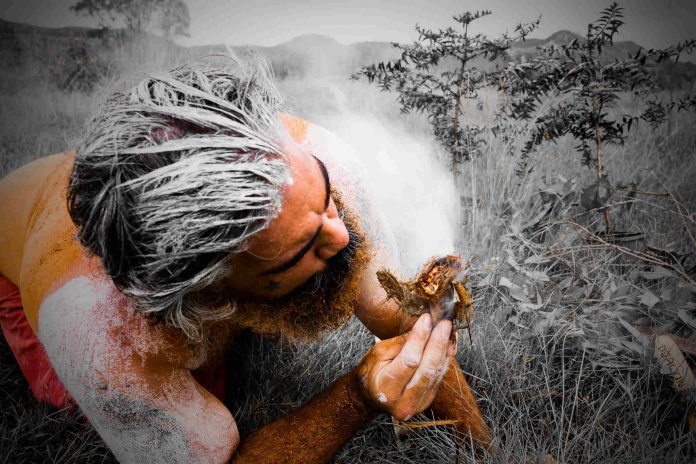 A hinterland artist is presenting a “raw and personal” 10-week exhibition that expresses his growth and connection as a Jinibara culture man.

Bj Murphy’s first solo exhibition is being held at Maleny, running until July 2, as an evolution of a project that was to be delivered as part of the 2021 Horizon Festival, which was cancelled due to restrictions and lockdowns.

“Mimburi Ninyangurra”, on show at Munnimbah Dja, Welcome Place, Maleny, features a series of ochre paintings and sculptural installations as well as a song-man performance.

Mr Murphy invites audiences into his ninyangurra, to be immersed in the lived experiences of a Jinibara man returning to country.

Jinibara traditional country is west of Old Gympie Road and the Blackall Ranges.

“Mimburi Ninyangurra” continues the sharing of culture as resistance to colonisation. following in the footsteps of Mr Murphy’s ancestor Gaiarbau (Willie McKenzie) and many others whose footsteps have tread the path before him.

Mr Murphy will host two talks, which give a deeper insight into the work, the process and cultural meaning, as part of the exhibition.

He said “Mimburi Ninyangurra” reflected his growth as an artist and Jinibara man.

It features a series of powerful and culturally-significant ochre paintings exhibited alongside sculptural forms that pay homage to previous works made under the guidance of Rick Roser, a Bigambul man and the original creator of the sculptural forms he named “Dreamtime Travellers”.

“In a nutshell, this exhibition is my Mimburi Ninyangurra – source of continual dreaming.

“My art is an expression of my continued growth and connection as a Jinibara culture man.

“It is presented with deep gratitude to Gaiarbau and the many others whose footsteps have fought for, and tread, this path before me. I am hoping this exhibition reflects exactly that.”

Sunshine Coast Council Arts Portfolio Councillor Rick Baberowski said the Horizon Festival was a fantastic vehicle for shining a spotlight on so many artists.

“What is incredibly important is showcasing and supporting the increasing scope of talent we have the good fortune to have within our region,” he said.

Cr Baberowski said the impetus of an exhibition is a great motivator and can provide a pivot point to an artist on many levels.

“I, like many others who were familiar with Bj’s work, are eagerly awaiting this exhibition to see his next body of work,” he said.

“I encourage everyone to take the time to experience what promises to be a very valuable exhibition.”

There was a ceremonial opening of “Mimburi Ninyangurra”, as the sun set over Jinibara country, on Saturday, April 23.

Exhibition details: Runs until Saturday, July 2. From 9am to 4pm on Thursdays and Fridays and from 9am to 2pm on Saturdays, at Munnimbah-dja, Welcome Place, 20 Coral St, Maleny (Jinibara Country).

Artist talks: Hear Jinibara Artist BJ Murphy yarn about Mimburi Ninyangurra, the stories that live within the artworks and Country on Saturday, on Saturday, May 7 and Saturday, June 25, from 10.30am to 11.30am, at Munnimbah-dja, Welcome Place 20 Coral St, Maleny (Jinibara Country). Register at letsyarn@munnimbahdja.com.