Wreck remnants to inspire the next generation of sailors and archaeologists 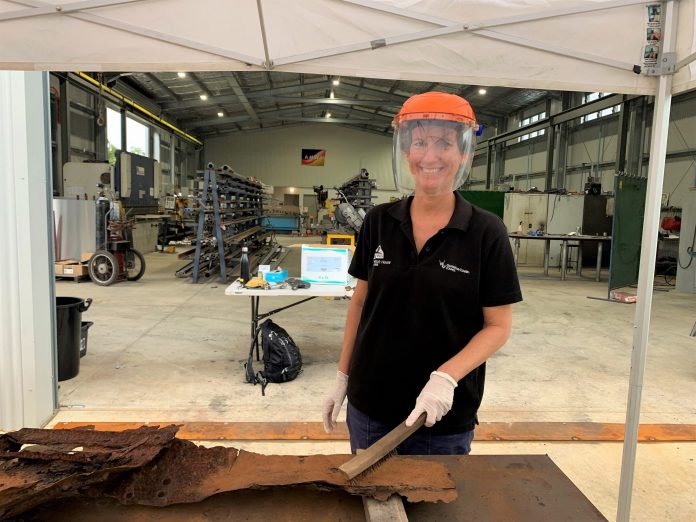 Pieces of a historic Sunshine Coast shipwreck are being restored, to preserve and put on display.

Parts of the 129-year-old S.S. Dicky are being repaired so some of the iconic vessel can be saved and showcased in Caloundra and at the Landsborough Museum.

They will make a welcome addition to the Stage 2 Dicky Beach Precinct Plan, which started construction on April 19.

Sunshine Coast Council Division 2 Councillor Terry Landsberg said it was great to see the community come together to celebrate the Stage 1 opening in September, which included the new skate park and major upgrade of the beachside park.

“The Stage 1 works included the S.S. Dicky propellor relocation, new and improved community facilities such as the public amenities and skate park, connecting pathways, a new picnic shelter and beach showers,” he said.

“The second stage of works will complement the first, with connecting pathways, improved beach access, custom furniture and seating which will encourage locals and visitors to grab a spot of lunch from the nearby shops, or just spend time outdoors.

“It really will provide a welcoming space and experience for people of all ages and abilities.

“The wreck’s significance to the local area will continue to be shared in Stage 2 works, through interpretive elements and ship pieces featured on a viewing deck, which has direct line of sight to the location of the S.S. Dicky beach grounding.

“Interpretive signage will explain the rich history of the iron-hulled steamer, driven ashore at Caloundra during a cyclone in 1893.

“Some parts of the ship are being restored by council’s heritage team to be displayed in the Dicky Beach Surf Life Saving Club, Landsborough Museum and at the precinct.”

“Some of the artefacts we are restoring from the ship include parts of the frame and hull still showing rivets, and even a small piece of timber which I think the community will really love to see up close,” Ms Marczi said.

“The preparation process includes soaking the items in either a water and bi-carb mix or water and citric acid solution, to remove the salt and rust and inhibit corrosion.

“On some of the pieces we then remove the barnacles and rust using either a chisel, chipping hammer or blow-torch. The objects are then treated with either fish oil or a wax which helps them withstand the outdoor elements.

“Once we undertake this preservation process, you can really see the difference.

“I like to think I’m playing a small part in preserving an iconic piece of our history and once on display, who knows, we might even inspire the next generation of sailors or archaeologists.”

Video: Watch how the S.S. Dicky pieces are being restored by the heritage team.

Council developed a plan for the area, working hand-in-hand with the community following the partial removal of the historic S.S Dicky wreck from the beach in 2015.

The upgrade is a welcome addition to the Dicky Beach Coastal Pathway upgrade, which started works on April 11.

The pathway aims to better connect locals and visitors to the park and with businesses across the street, the Dicky Beach Holiday Park, beach and surf lifesaving club house.

Council will keep the community informed about the Stage 2 precinct work on council’s website.

For more information about the S.S. Dicky, check out the Time and Tide video on council’s YouTube site, or visit Council’s Heritage website.

The Heritage Levy is charged to every rateable property and used to document, research, conserve, protect, promote and provide access to those tangible and intangible items, places, facilities and events that define the stories, history and values of the people, communities and culture of the Sunshine Coast.

Construction is expected to be completed by mid-August, weather conditions permitting.