Sand blast from past: Happy Valley spit turns back time

Sand blast from past: Happy Valley spit turns back time 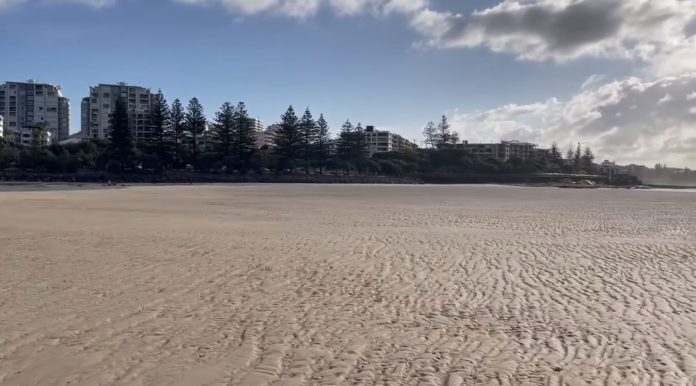 Beachgoers at Caloundra are marvelling at a spectacular sand-scape not seen for four decades.

The tidal breakthrough at Bribie Island in January has changed the water movement and shifted the sand in the passage and created a much larger spit at Happy Valley.

It has also seen what was the Caloundra bar narrow to just a stone’s throw across to Bribie.

The stark changes were particularly prevalent on recent super low tides, when children were able to ride their bikes where there would normally be an expanse of water.

The sand stretched from the Happy Valley foreshore towards Bribie Island.

He said the “spit” reminded him of his youth.

“When I first came to Caloundra in the late 70s, it used to look like that,” he said.

“They used to have a fair there, with a Ferris wheel and stalls and all sorts of things.

“But over the years the bar changed and the sand moved, and we didn’t have sand there for a long time.

Scroll down for more images of the changes

“But, clearly, the breakthrough at Bribie has affected the movement of sand and today it looks like a throwback to the late 70s and early 80s.

“I haven’t seen it like this for a long time.

“There’s plenty of sand, as you can see by the photos.

“I was right by the end (of the spit) and there was miles of sand.”

Mr Taplin, 60, knows the region’s coastline well. The Kings Beach resident worked as a local lifeguard for 27 years and was the lifeguard supervisor for the southern Sunshine Coast region.

He said it was an unusual experience, walking around the new spit.

“It was a different perspective, standing out where the water would usually be,” he said.

“I was standing on a solid sand bank, looking back at Caloundra, with a perspective you would normally only have from a boat.”

“It was impressive. It looked good and it reminded me of my youth, when there was plenty of sand.”

“There were guys riding bikes and people walking dogs at 7am.”

“It’s created a fantastic bay at Bulcock Beach,” he said.

“The lifesavers are putting their flags up from their hut to all the way out to the sand spit.

“It’s one big, beautiful, calm beach because there is no longer a 10 to 14-knot runout.

“The bulk of the water is heading out over the south bar (the breakthrough), so it’s made it (conditions at Happy Valley and Bulcock Beach) a lot safer. 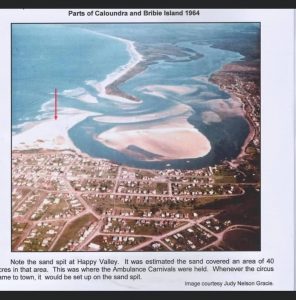 “It’s a quiet, family-friendly place, which is wonderful.”

But Mr Pearce said the “downside” was that the area “was silting up a lot”.

“The coastal scientists maintain they don’t believe it will close because there’s enough water movement.”

Mr Pearce also said there were large sand deposits “hundreds of metres out to sea”.

“That’s where boaties have to be really careful, when they are heading out.”

Mr Pearce said the main issue they faced now was an emerging spit from the northern head at the new south bar.

“It’s coming across to Golden Beach, so at low tide a lot of vessels can’t traverse that anymore.

“There is so much sand developing there.”

He said it emerged during the past month or so.

“If it does come across to the point that it lines up with the central sand spits, where the old oyster leases used to be, that could be a major issue, because we can’t traverse north or south.”