Dawn of tributes to those who paid ultimate price

Dawn of tributes to those who paid ultimate price

Flashback: the dawn of our tributes to those who made the ultimate sacrifice 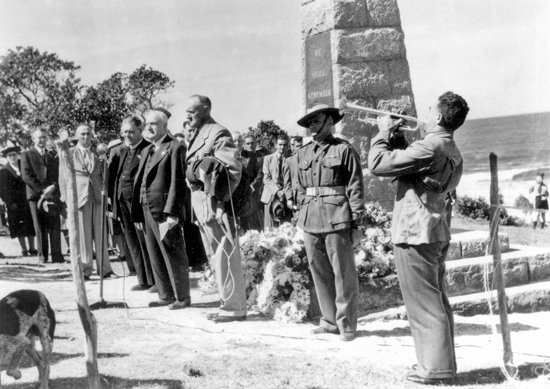 On April 25, the kids from the Nambour primary school lined up to march through Brookes Park and stand in front of the tall, white cenotaph on the hill at Coronation Drive.

The fife band played, the kids fidgeted, many not quite understanding what it was all about, even those whose dads had returned from World War II.

The speeches seemed endless to bored children standing in the sun on hot bitumen while Bruce Highway traffic was diverted around them, but then the bugle sounded and it was back to school.

It was the 1960s and the annual service demanded full solemnity. Any chatter or giggling was met with a harsh rebuke, but Gallipoli, the remote Turkish peninsula on the other side of the world, was etched into everyone’s psyche, young and old.

Every little town on the North Coast stopped to honour the Anzacs, whether it was a dawn service or a parade followed by a service at the local memorial.

And plenty of memorials went up in the years following The Great War, which wouldn’t be renamed World War I until there was a second almost 20 years later.

Century-old monuments, avenues of trees, honour boards, and cairns are scattered around the hinterland towns where the population was based.

Most coastal memorials, with the exception of Tewantin, didn’t appear until after World War II.

Scroll down for more flashback photos

In Tewantin, a statue of a Digger was unveiled in 1922.

At Landsborough, Arthur Bennett donated land in 1919 for Peace Memorial Park which opened in 1922.

Maleny built a Soldiers Memorial Hospital that opened in 1920, and was free for all returned servicemen and women. It also put up a cenotaph on the banks of Obi Obi Creek near the Memorial Hall.

Marble plaques were unveiled on the front pillars of Montville Memorial Gates on Armistice Day in 1921 and the citizens of Eudlo put up a rock cairn in Rosebed Street.

Cooloolabin residents chipped in for a plaque to the memory of the Fraser brothers William and John, who were both 27 when they were killed in action in 1916 and 1918 respectively.

They were the sons of the area’s first European settlers John and Janet Fraser, who donated the land where the hall was built in 1916.

Montville school children planted six trees in 1923, one for each of its six sons lost, and Beerburrum’s Anzac Avenue was state heritage listed in 1988.

Eumundi is one of the few towns in Australia that didn’t erect a memorial. Instead, the Women’s Patriotic Committee planted 20 fig trees in a Memorial Drive.

But like most towns, it had an honour board that was unveiled in the School of Arts in 1917.

A year later, Kenilworth district residents placed one in the Gheerulla Hall.

The honour board in Palmwoods Memorial Hall can claim worldwide fame.

It includes the name of Cedric Popkin, the soldier credited with shooting down the infamous Red Baron on the Somme on April 21, 1918. Although from the northern rivers of NSW, Popkin was working as a carpenter in Palmwoods when he enlisted in 1916.

And commemorating the brave souls from the sparsely populated North Coast towns who left farms and families for the battlefields continued down the decades.

The Maroochy District and Salvation Army bands were always in demand on April 25 as hundreds of ex-servicemen marched in parades from Caloundra to Tewantin.

In 1970, Caloundra RSL boasted that the dawn service on the 55th anniversary of Gallipoli was the biggest in a decade.

Woombye held an annual Anzac Day sports afternoon, beginning with a parade of ex-servicemen led by the school’s fife band and joined by Scouts, Cubs, Brownies, marching girls and members of the Palmwoods Police Youth Club. Its raffle in 1971 had the special first prize of a transistor radio.

For many years, it was possible to attend dawn service in both Palmwoods and Woombye, the former choosing the actual time of the Gallipoli landings while the latter went with the Gallipoli sunrise an hour later.

But most prominent of all was activity at the cenotaph in Nambour, a white obelisk on a 6m square base rising 6m to a top shaped like a pyramid, right beside the Bruce Highway which passed through town.

Steel railway lines were used as reinforcement to ensure it could never be moved, but that didn’t help in the end.

The Bruce Highway bypassed Nambour in 1990, the cenotaph came down and in 1993, a replica was dedicated at Quota Memorial Park behind the RSL.

But the monuments still stand and the services and parades continue. They are not forgotten.