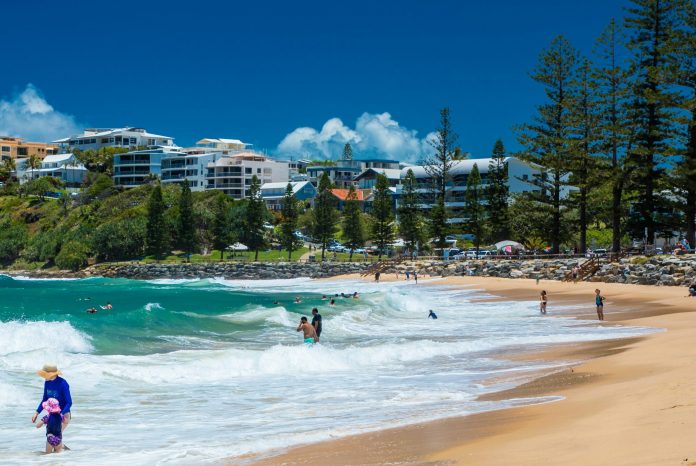 One of the Sunshine Coast’s most popular beaches is about to lose some of the iconic trees that shade its foreshore.

Towering Norfolk pines are synonymous with Caloundra’s Moffat Beach and believed to have been planted there about 90 years ago, in the 1930s.

However, two unfortunately will have to be felled due to the damage caused after wild seas in February caused a dramatic collapse of the seawall.

However, it was determined that the vital work to safeguard the seawall would impact their roots and make them dangerously unstable.

An independent investigation found approximately 80m of the seawall had been damaged, which included “slumping” of a 30m section of the barrier and significant cracking in other areas.

The beach access ramp and nearby stairs are also within the “failure” zone and currently unsafe for public access.

Immediate action will be taken to stabilise the wall and allow time for a carefully designed, long-term solution.

“Repairing the seawall presents an opportunity to create an even better and more usable outcome for the area in the future, but we urgently need to first ensure it’s safe for our entire community and visitors,” he said.

Cr Landsberg said, regrettably, some vegetation would need to be removed.

“Unfortunately, as part of the repair work, it’s essential that two nearby Norfolk Pines will need to be removed, but more shade trees will be planted during the major rebuild of the wall towards the end of the year,” he said.

“We know the trees along the Moffat Beach foreshore are extremely important to our community, and every scenario has been explored to avoid this necessary step.

“However, to make the seawall safe, it needs to be made wider and soil at the top of the wall needs to be removed.

“This will encroach into the structure root zone of two nearby Norfolk pine trees. 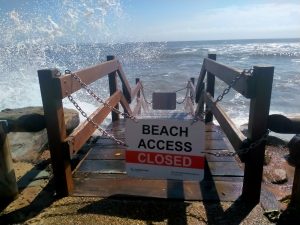 “If the structural root system is damaged, it’s highly likely that in future high wind or storm events, these trees would fall landward across the footpath, park and car park potentially causing severe injury, even death, to any person nearby.

“Obviously, this is not something council is willing to risk, particularly with nearby playgrounds, carparks and many people frequenting the area. Everyone’s safety is our top priority.

“Council apologises for the inconvenience during construction and thanks the community for their patience as we work to make the foreshore area safe for everyone.”

More information is being sought regarding the history of the Norfolk pines at Moffat, who planted them and why. If you know, email us at news@sunshinecoastnews.com.au

Cr Landsberg said that when it was finished, the temporary wall would look different to the existing wall as it would be wider with a gentler slope.

“This won’t be the final product as in the background council is developing a plan to fix the remainder of the damaged wall, which is about 80m in total. This section will be rebuilt again as part of that project,” he said. 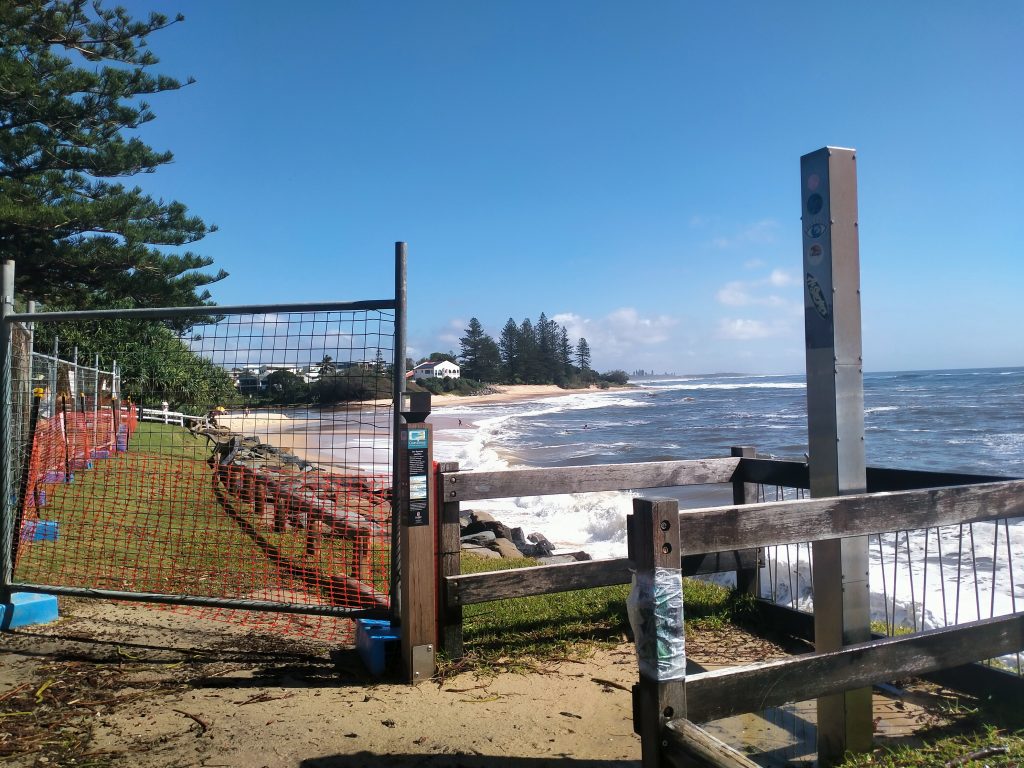 During the emergency work, rocks will be removed from the top of the wall to reduce the weight.

Help keep fair, fast and FREE Sunshine Coast News coming by signing up for our free Daily News Feed: Please go to SUBSCRIBE at top of this article to register

The rocks will be rearranged to achieve a gentler slope, spreading the weight of the structure out over a wider surface area.

The beach access and ramp will remain closed as these need to be completely rebuilt, which will occur during the second stage of major works later in the year.

According to the Encyclopaedia Britannica, the Norfolk Island pine, (Araucaria heterophylla), is native to Norfolk Island. The wood of large trees is used in construction, furniture, and shipbuilding. The plant is grown as an outdoor ornamental in regions with a Mediterranean climate, and the attractive saplings are cultivated throughout the world. The Norfolk Island pine was discovered on the second expedition of Capt. James Cook (1772–75) and was introduced to cultivation shortly thereafter. Despite its common name, the plant is not a true pine. Some of those seen around Caloundra are believed to have been planted in the 1930s.