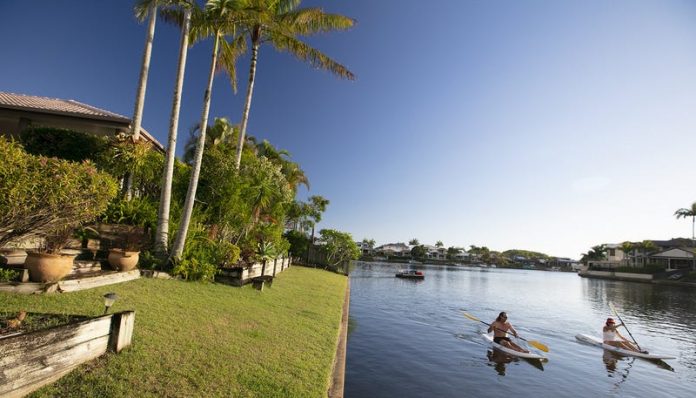 Sunshine Coast property watchers have their heads turned towards a “prized precinct” on one of the southern beaches that is setting astronomical new benchmarks in record sale prices.

The latest — a property described as “the jewel in the crown” — has beaten the previous sales record for the area by a whopping half-a-million dollars.

The sale price for the home — sitting on a large 1052 sqm waterfront block that takes in expansive views over Tokara Canal — exceeded expectations at a record $2.8 million.

This is only the second time the Teal Court property has changed hands. The last sale was in 2008 for $1.35million.

Ms Jones, who sold the property this time around, said the local buyers had been wanting to secure a canalfront home for their young family.

They saw the advantages of living in comfort and space in the pristine natural environment, with an adjoining park, the only sandy beach on Tokara canal at their doorstep, and only a short walk to the patrolled surf beach, she said.

“The accessibility to the beach, Currimundi Lake and Bokarina Beachside development with the proposed cafe and restaurant precinct was also a contributing factor,” Ms Jones said of the sale.

“Locals love this prized beachside precinct and new benchmarks are being set in the area.

“We are not really surprised that buyers are now appreciating what the suburb offers.

“It is one of the greenest beachside suburbs with access to so many amenities, not to mention one of the few remaining dog-friendly beaches.”

The home boasts a grand master retreat, including a walk-in robe and generous ensuite, privately positioned to take in views over the canal and fully tiled in-ground pool. The 5th bedroom/office/nursery is next to this retreat.

Three further bedrooms and two bathrooms lie behind the three spacious living areas that flow through the centre of the home.

The grand kitchen with its wide granite benchtops, breakfast bar and abundant storage space accesses the covered al-fresco dining areas around the pool.

While space is a rarity in many beachside suburbs, this property offers nearly twice the amount of land than most surrounding suburbs, allowing triple garaging and enough room for a caravan and boat.

“We saw a mix of interest from both interstate and Brisbane, although we are finding these peaceful beachside enclaves are a real favourite amongst Sunshine Coast locals,” Ms Jones said.

“It’s one of those suburbs that just keeps improving, now offering more amenities than most beachside suburbs and is no longer a secret.

“We are finding the original owners in this area are now downsizing and families with children or baby boomers are moving in and bringing new energy to the area.”

Wurtulla and surrounds have been drivers of property sales in the region, especially during the pandemic.

The Sunshine Coast’s new southern “golden triangle” – Wurtulla, Bokarina and Birtinya – has enjoyed growing popularity as the nearby Hospital and Health Precinct has emerged and the popular Coastal Pathway has been developed, hugging the dunal area and nature reserve.

Even modest homes set back from the canal or beach have secured million-dollar-plus price tags.

“It has a planning overlay to stop medium density in this prime residential pocket, which is another reason why buyers are preferring here to the strip north to Buddina which is becoming higher density with duplexes and three-story developments popping up everywhere.”

The Stockland master-planned community of Bokarina Beach – one of the Sunshine Coast’s fastest growing areas – is set to throw the spotlight on the area even further as cafes and restaurants open their doors amid the eight-storey high-rises nearing completion.

Walter Iezzi’s Oceanus has completely sold out its 104 apartments and awaiting its first owner-occupiers on Longboard Parade.

Seanna Residences, by developer Clark Group, on 2ha on the corner of Bokarina Boulevard and Longboard Parade, also have completely sold out. Residents will soon be moving in to the 63 luxury three-bedroom apartments opposite the patrolled surf beach.