The fast-growing town that’s stuck in a jam

The fast-growing town that’s stuck in a jam

'Help get us moving': the popular suburb that's calling for help to get residents out of a jam 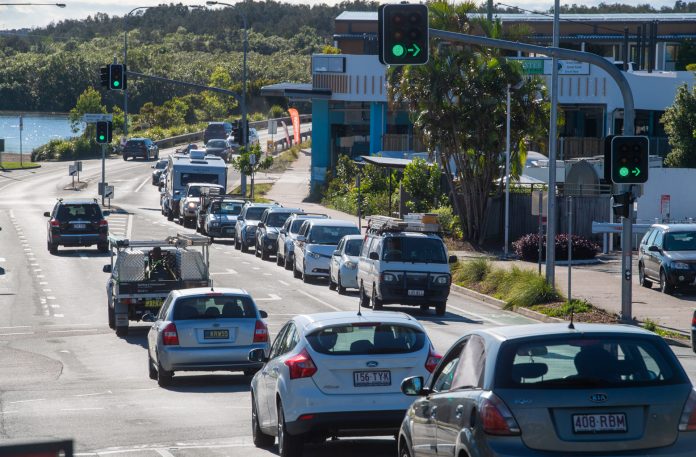 Frustrated locals and motorists have had enough of one of the Sunshine Coast’s worst peak-hour traffic hot spots and are calling for a long-term solution to fix the mess.

Somewhat of a blame game has emerged between the State Government’s Department of Transport and Main Roads (TMR) and Sunshine Coast Council, over how the problem has arisen.

Residents and those who must travel through the suburb regularly realise that the problem is not an easy fix but something must be done.

As Travis Greer wrote on a recent Facebook post on the problem: “I went into town this arvo around 3:30 and it was backed up … They have already wrecked this place as the old roads weren’t made for the amount of traffic that’s here now!”

His view is balanced, however, by Sunshine Castle owner Birte Benecke-Uhrig, who has a bird’s-eye view of traffic flow from above the town’s major roundabout.

She believes the local traffic problems are nothing compared with trying to navigate through parts of other towns and cities around the world – Auckland and Paris in particular.

Thousands of motorists drive through the heart of Bli Bli daily – to the north, south, east and west – to attend schools and workplaces, and head to shops, homes, the Maroochy River Golf Course and the Bli Bli Watersports Complex.

Much of the traffic is funnelled through Bli Bli on the David Low Way that curls from Pacific Paradise over the Bli Bli Bridge, around the roundabout outside the castle tourist attraction towards Maroochydore, or through to Nambour along Nambour Bli Bli Road.

Both routes link the central Sunshine Coast to the Sunshine Motorway (north to Coolum and south to Maroochydore) and Bruce Highway (west to Rosemount and Nambour) – in all cases using the castle roundabout in the centre of town.

The traffic problem is compounded by two sets of traffic lights within less than 100m outside the main shopping centre. The castle roundabout is only another 100m from one of those sets of lights.

Calls for a bypass of the middle section of Bli Bli, new secondary access roads, a second bridge across the river linking Muller Park on the eastern side through to Erbachers Fruit and Veg shed on David Low Way at Diddillibah, or an overpass over the shopping centre have been among the longer-term options put forward on social media.

Residents of the burgeoning suburb fear more traffic being drawn by the much-anticipated $20 million Bli Bli Tavern in the third and final stage of the Bli Bli Village Town Centre.

Bli Bli has strong Indigenous ties to the Gubbi Gubbi People, but its European history dates to grazier John Westaway and his two sons, who erected the first homestead in the 1862.

Back then, access was largely via the neighbouring Maroochy River, and the large land selections needed little in the way of a roads network.

But on the soils once devoted to grazing and fruit and vegetable farming, as well as sugarcane and river oyster farming, the suburb lying at the centre of the Sunshine Coast region has thrived.

Families, couples and retirees have been drawn by the quiet village atmosphere, easy access to the rest of the Coast and affordable house prices.

The 2016 Census puts the Bli Bli population at 7800, but the appearance of more modern residential developments and village shops has accelerated in recent years with the opening of the Parklakes development stages, Bli Bli Village Town Centre and the Good Samaritan Catholic College.

The growth of the suburb has put added pressure on the roads, with a far greater movement of cars getting in and out of Bli Bli, but without the added infrustructure to alleviate the increased traffic flow.

The traffic congestion starts to build from about 8am as residents head to work and school drop-offs and in the afternoons from about 4pm.

These long lines of vehicles and can stretch in the mornings from the middle of Bli Bli with the traffic light/roundabout combination back to Thomas Road in the north; and in the afternoons,  through two sets of lights back across the Bli Bli Bridge and as far as the watersports complex in the east.

A Sunshine Coast Council spokesperson said that while Nambour Bli Bli Road and Maroochydore-Noosa Road (David Low Way) were state-controlled roads under the jurisdiction of the Department of Transport and Main Roads (TMR), the council was aware of the situation.

The spokesperson said the council was committed to liaising with TMR to advocate for optimised traffic flow in the area.

“Council will continue to monitor growth in traffic demand and transport network performance to identify issues, opportunities and challenges in the area,” the spokesperson said.

But a Transport and Main Roads spokesperson said the majority of growth in Bli Bli, including development of the town centre, was driven by developer works approved by Sunshine Coast Council (SCC).

“We are aware of congestion at Bli Bli during peak periods of the day which have increased as a result of population growth,” the spokesperson said.

“We regularly review the transport network and continue to manage traffic conditions in the area as part of routine operations.

“With SCC, we have jointly delivered significant upgrades to active transport facilities in the area in recent years, including a cycleway connecting Maroochydore to Bli Bli with a dedicated and separate active transport bridge across Eudlo Creek at Diddilibah.”

As to the synchronising of the lights, the spokesperson said TMR had reviewed the operation of the traffic signals on David Low Way (at the intersections with the River Markets car park and Castle Green Court) and could confirm they were operating appropriately.

“The signals are co-ordinated so right-turning traffic exiting the River Markets then waits for a green light at the Castle Green Court signals,” the spokesperson said.

“Without this, the volume of traffic exiting the shopping centre would lead to significantly increased congestion around the town centre.

“We have traffic cameras at this location and monitor traffic signal operations. We will make changes as required.”

Comments on social media in recent months tell of the frustration of motorists, who believe the local and state governments need to address the chaos caused by the scale and intensity of development that has occurred and is still to come in Bli Bli.

Some of those comments were in response to a post shared to the Parklakes @ Bli Bli Community Board on Facebook about development applications being lodged with council for Parklakes Central – bringing another 197 new homes, a retirement village and small supermarket to the area.

Travis Greer wrote: “I went into town this arvo around 3:30 and it was backed up … They have already wrecked this place as the old roads weren’t made for the amount of traffic that’s here now!”

Paul Alan added: “How super! (I jest of course). So, getting in and out of the shopping centre will be even more frustrating. Ah well, ‘growth’ is the byword. I’d sooner see ‘shrinkage’ myself.”

Denis McMahon replied: “Paul Alan, you have to be able to get to the centre first and that’s a nightmare early a.m. already … So we add another few hundred cars to the mix as there doesn’t appear to be any new roads coming to cater for the increase.”

But Mrs Benecke-Uhrig, who was about to fly to Auckland, was not looking forward to sitting in that city’s traffic snarls.

“You wait, I’ll come back thinking the Sunshine Coast is the bee’s knees,” she said.

Mrs Benecke-Uhrig said that she was lucky that she lived next door to her business and didn’t have to travel far on roads daily, or at peak times.

“I do school runs and there’s a lot of traffic going into the shopping centre and all sorts of other places at that time but I’ve never actually had huge problems,” she said.

“In the mornings, where things back up is usually because something unusual has happened (such as an accident).

“It’s much worse to Bli Bli, say, 10 years ago, but with progress comes challenge. I find it really annoying when people just choose to complain rather than see some of the good stuff.”

But Mrs Benecke-Uhrig acknowledged “the powers that be” needed to find solutions to replacing the old Bli Bli Bridge: “That hasn’t been made a priority for way too long”.