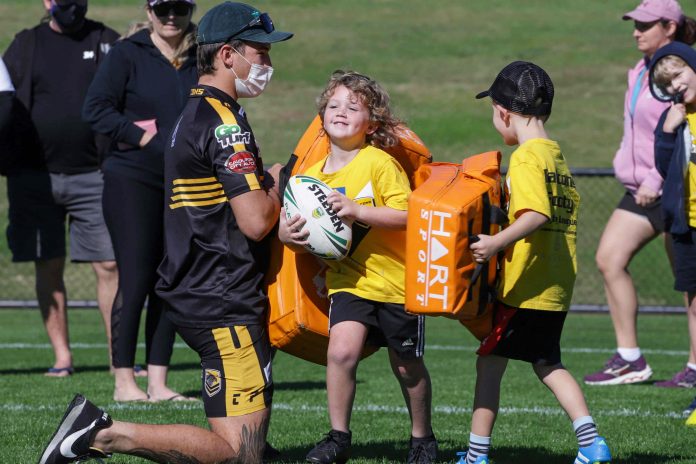 They get to train and play modified rugby league and develop social and motor skills with the help of qualified coaches, in a safe and supportive environment at Sunshine Coast Stadium.

Falcons CEO Chris Flannery said the initiative provided the kids and their families with great opportunities.

“It’s really for kids who can’t play in a mainstream sports team,” he said.

“We found there were a lot of kids who wanted to play sport but couldn’t play on Saturday mornings with other kids.

“So, we decided to start the program … and we found the kids enjoyed it.

“It’s also provided the parents with a chance to network with others who are in a similar position to them with kids with different abilities.”

They are split into groups, depending on their abilities, and take part in non-contact skills drills and games focused on rugby league.

They are supported by Falcons’ players, coaches and staff, while former Brisbane Broncos and Queensland State of Origin star Matt Gillett is the program’s ambassador.

“Over the course of a year, it’s pretty cool to see how much the kids grow their skills and confidence,” Flannery said.

“A lot of the parents we have spoken to said they have tried different things in the past and for one reason or another it hasn’t worked out, but for some reason the kids really take to our program.

“We’re not really strict on rules so if some kids want to go and kick a footy in the wrong direction then no worries.

“But I know the parents get quite surprised because many of the kids follow directions, and they wouldn’t normally at home or in other programs.

“So, it seems to be a program that everyone enjoys.”

It has also proved popular among the Falcons players, who help out before they play.

“They come down and give us a hand and they get to know the kids and they enjoy turning up each week,” Flannery said.

The Falcons and the program’s supporters, including major sponsor Maroochy RSL, have helped it flourish.

The program was recognised with a national award in 2015, when the Falcons were awarded an Above and Beyond Award by Aspect, Australia’s largest autism-specific service provider.

“The kids enjoy turning up each time … and it’s just a small way we can give back to the community,” Flannery said.

The juniors even get to enjoy a trip to an NRL game.

“We fund the program but thankfully we have some good sponsors who support it too, which has allowed us to take the kids to Broncos games,” Flannery said.

“We hire a bus and take them down and watch the footy. Matt Gillett, who has been with us for years, has been great and helped us with that Broncos connection.”

The program has about 60-70 registered participants.

The 2022 edition was due to get underway with a come-and-try day at the Falcons’ first home game of the season on Saturday, April 2, from 12.45pm.

“The kids can come and see if they like it and if they do, then they can register and participate in the rest of our home games,” Flannery said.

To enquire about the program and registration, see the Falcons Footy – Rugby League for Children of Different Abilities website and Facebook page.

Prospective program sponsors can contact the Falcons via Sunshine Coast Falcons or phone the Falcons office on 54932902.