Jane Stephens: our PM fans the flames of The Slap

Jane Stephens: our PM fans the flames of The Slap

Jane Stephens: why on earth did our prime minister weigh in on The Slap? 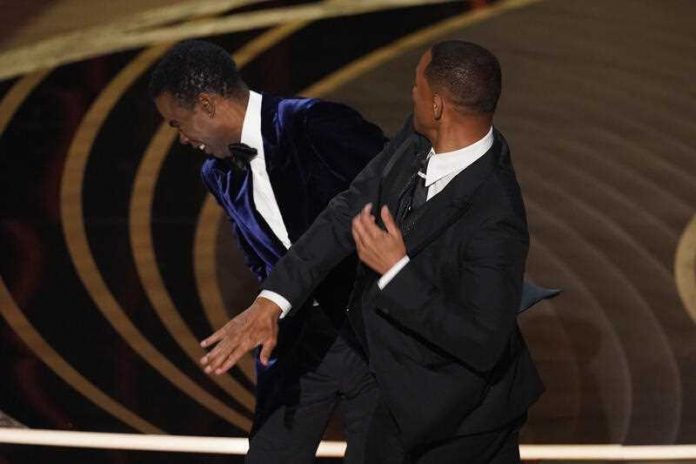 It is The Slap that continues to reverberate around the world.

It kicked off when actor Will Smith did his ’nana over a harsh joke Oscars host Chris Rock made about the baldness of his wife, actor Jada Pinkett Smith, at this week’s ceremony.

Smith strode on stage and clocked Rock, and then there was rocking all over the world.

The immediate responses were strange, on reflection. Smith was consoled, while Rock himself disappeared — so the instinct was to comfort the perpetrator, not the victim.

The Academy Awards room, presumably the online and TV audiences and the internet went into overdrive. It all seemed a bit unreal, given those involved were actors and presumably prone to being dramatic.

But it was, as the cool kids say, fo’ realz.

Some celebs said they wished their man would stand up for them like that. Some said picking on a person’s health condition was not cool, even in jest. Many were rightly horrified at Smith’s violence.

But soon after, when Smith went up to accept the Best Actor gong, he said he was sorry – sort of. Any penalty is yet to be revealed.

It made for a noteworthy news item early in the week and that seemed to be that.

But then the flames were fanned here, when the Prime Minister made mention of it on Brisbane radio Thursday morning.

Why on earth would he weigh in? Why didn’t he just back away, sensing danger and not touching the hot stove?

With an election looming it would have been prudent, but in an effort to be jolly and friendly, our PM couldn’t help himself.

In reference to the Rock clocking, he was asked if he had ever felt the need to cross the floor to slap someone in Parliament.

“I’m also fiercely defensive of anyone who would say anything about Jenny too, so I can understand it,” he chortled. And he added, somewhat lamely: “That’s not how you roll.”

He missed his chance to note that a physical response to a verbal lashing is never OK, even if in defence of a loved one. Haven’t we been told that repeatedly since childhood?

He also could have said violence should never be conflated as a sign of love.

He could have said that women as empowered as Jada or Jen are unlikely to need a knight in shining armour to ride to their rescue and biff someone if their feelings are hurt.

Surely, in these modern times, they are able to speak up for themselves if they are offended.

Upset is rippling over the ill-conceived action of the juniors in the PM’s party – the Young Liberals when they joined in the reaction avalanche on social media. 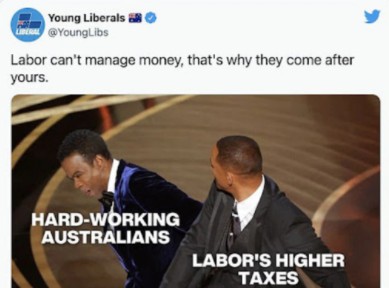 Seemingly forgetting themselves, they posted a mocked up version of a still of the incident, positioning Rock as hard-working Australians and Smith Labor’s higher taxes.

The meme (now taken down) has led to a political skirmish on both social and legacy media.

And so the rocking around the world continues.

These are strange, hot-headed times.