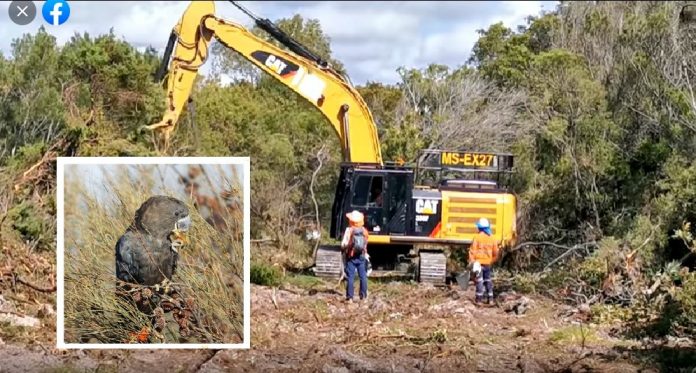 Noosa residents say they are devastated after witnessing the “arm of destruction” clear trees in a known prime feeding ground for one of Australia’s rarest cockatoos.

Locals say she-oaks, which are the only plant species that glossy black cockatoos eat, were among the vegetation knocked down on Tuesday.

The clearing was to make way for stage one of UnitingCare’s nursing home and retirement village development in Sunrise Beach.

Maxine Hitchens arrived early at the forested block in Grasstree Court to witness the bulldozing and said it was a “very distressing” situation.

Mrs Hitchens has been supporting her 11-year-old son Spencer’s campaign to Save Sunrise Glossies which he has documented on camera.

A Change.org petition has attracted more than 62,000 signatures.

“If they destroy this habitat, they’ll go extinct locally but probably further,” she said.

“We have pleaded with them not to develop and to do a land swap and all our voices have been ignored.

“We’re coming up against brick walls. No-one will listen to the science. We’re in a Biosphere. We should be doing better than this.”

Mrs Hitchens said watching the destruction unfold was triggering “eco-anxiety” among the adults and children who were passionate about protecting native species.

The glossy black cockatoo is listed as vulnerable in Queensland and it’s not known how many remain in the wild.

Volunteers who took part in a ‘Birding Day’ in 2021 spotted 164 glossies (but possibly as many as 220) across Queensland.

One-third of them were counted in Noosa and 88 per cent of those at one site.

Black glossies have a very restricted diet, feeding only on the seeds in cones of she-oaks (Casuarina and Allocasuarina) and only on selected individual trees, according to the Glossy Black Cockatoo Conservancy.

“They will return to the same food tree time and time again, often ignoring nearby trees that are full of cones, but these patterns of feeding are poorly understood,” their website states.

A State Government fact sheet says the species has a “strong fidelity” to particular feed trees and returns to selected trees over consecutive years.

Mrs Hitchens said last year 40 glossies came to feed on the local she-oaks and it was believed to be one of the most significant areas for the cockatoos in Australia.

UnitingCare has had a development approval since 2011 for its staged nursing home and retirement village project.

Stage one is a Residential Aged Care Facility on 0.8 hectare which is where heavy machinery has been getting the ground ready.

Stage two is the retirement village on a much larger five hectares.

“Blue Care is committed to delivering the Sunrise Beach aged care and retirement living precinct that will address a critical shortage of aged care beds in the Noosa region,” said a statement from a UnitingCare spokesperson.

“We have made a significant investment in designing the precinct and have secured development approvals from Council, State and Commonwealth Governments.

“We are now going ahead with construction of Stage 1 of the precinct, the Residential Aged Care Facility.”

UnitingCare says it will offset 56 she-oaks to be removed across both stages by planting 1,000 feed trees about 1km away in the Girraween Nature Refuge.

These young she-oaks have been propagated since 2018 from trees on the site and are at various stages of growth.

One hundred and twenty grasstrees were also removed and transferred to the refuge.

“Hundreds of other Australian native seedlings will also be planted on the rehabilitation site.

“The development site is connected to the rehabilitation site by a green corridor comprised of National Park and council-owned land that is dedicated to conservation.”

UnitingCare says it has also adapted the design of the aged care home to retain more than 20 percent of the identified feed trees at Grasstree Court.

“In November 2020 we were also successful in seeking permission from Noosa Shire Council to amend our development approval in response to the community’s request to stage construction of the precinct.

“The staged development means a reduction in the extent of vegetation clearing at one point in time, giving the trees we are replanting at Girraween Nature Refuge more time to mature.”

Noosa Mayor Clare Stewart said the council appreciated there was some angst in the community and would continue to liaise with the glossy black-cockatoo group.

“I have personally met and walked the site with the group’s members, as have other councillors,” said Mayor Stewart.

“(Tuesday’s) meeting was an opportunity for our new CEO to also hear some of the concerns.

“17 glossy-black food trees will be protected across both lots, and the trees lost will be compensated for by ongoing rehabilitation efforts by Blue Care, Council and bushland care groups.

“More than 1000 Allocasuarina littoralis trees are being planted on a rehabilitation site, which will result in a substantial net gain of she-oaks in the area.”