‘Fantastic conditions’ as thousands turn out for tri

‘Fantastic conditions’ as thousands turn out for tri 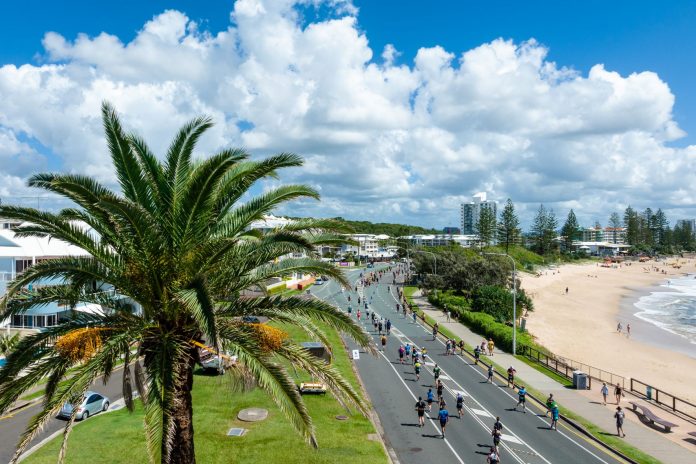 The 72-year-old gymnast who keeps stretching the boundaries

Her clubmates describe her as "one determined lady'', and it's easy to see why. Aged 72, and after two hip replacements, Golden Beach resident Laureen More
More
Lifestyle

From waves to walls: rising to exciting new challenge

Thousands of runners hit the road for the return of the Runaway Noosa Marathon running festival after a two-year hiatus. More than 4000 participants took More
More
Lifestyle

A mother-of-two who suffered post-natal depression has found her stride as the inspirational founder of a women's running club. Coolum Beach's Renee Chagoury will line More
More
Sport

Athletes from across Australia have hailed the 30th anniversary of the Mooloolaba Triathlon as “fantastic” and thanked locals for their “amazing support”.

More than 4,000 competitors took to the water and roads of Mooloolaba on Sunday for a 1.5km swim, 40km ride and 10km run, before crossing the finish line on Mooloolaba Esplanade.

Lorcan Redmond and Matilda Offord claimed the men’s and women’s titles in the Mooloolaba Triathlon Oceania Cup, with the two standing out from the competition.

Racing was tight around the course, with some of Australia’s top triathletes taking on the 1.5km swim, 40km ride and 10km run in and around Mooloolaba.

Athletes in the Oceania Cup are battling it out for positions at this year’s Commonwealth Games and Under 23 World Championships.

Redmond crossed the finish line on Mooloolaba Esplanade in 1:45:53, almost a minute clear of Luke Bate, with 2021 Noosa Triathlon champion Luke Willian just behind in third.

“I’m super happy to get the job done,” said Redmond.

“It was a tough race from the start, there was a group of about six or seven of us out on the bike there and we were just rolling turns on the highway at 40-45 kilometres per hour so it was good fun and then it was just a quick run to finish it off.

“The support was amazing, there were spectators the whole way along, all the cafes had people in there cheering as you went by, it was an amazing atmosphere to have here in Australia,” he said.

Sydney’s Matilda Offord was first across the line in the women’s race in 2:00:18, seven seconds clear of Charlotte McShane, with Natalie Van Coevorden just a second behind in third.

Offord’s Mooloolaba Triathlon Oceania Cup victory was her second win for 2022, after standing on the top step of the podium at the Oceania Cup event in Devonport a fortnight ago.

“I’m so excited with this one, I wasn’t expecting it, I’m stoked,” said Offord.

Brisbane’s Kieran Storch claimed victory in the Standard Triathlon, crossing the line in 1:51:40, almost a minute clear of Dean Cane, with Michael Boult four minutes further back in third.

“I had a pretty great day out there, even if I had a bad day it’s pretty hard to complain,” said Storch. “It’s a cracking day, especially after all of the dramas with floods and whatnot, I’m really, really happy, it’s a great start to the year.

“I just tried to relax on the swim, normally I go too crazy at the start, burn up and then fall off the back so I had a good swim for me and then just tried to go as hard as possible on the bike and hold my form on the run,” he said.

Emily Donker was the first female in the Standard Triathlon, finishing in 2:09:36, with Rosie McGeoch second in 2:11:18 and Esther Horn a further 30 seconds behind.

“I really enjoyed the race out there, I’m feeling really high, it was a great experience,” said Donker.

“The conditions are fantastic, Mooloolaba has really turned it on for the 30th anniversary and it’s great to see everyone out on course now enjoying it.

“It was a relatively small field for us at the front today so we came out of the water quite close together,” she said.

“The bike course was deceptively tough with the headwind coming back. On the way out we felt alright and then once we turned around it stung the legs a little bit, I felt quite good on the run, I really enjoyed it.

“It’s fantastic, the crowds are really enjoying it and everyone is really excited to be here so it’s a great atmosphere,” said Donker.

Australian Olympic swimming gold medallist Jessicah Schipper has made the move from the pool to the triathlon course, with the 35-year-old completing her first Mooloolaba Triathlon.

“That’s probably one of the hardest things I’ve done in my life, it was just so long,” said Schipper.

“But it was awesome, everyone was so supportive and it was a good atmosphere and it made it easier I think, knowing that everyone was out there doing the same thing, I’m really proud of myself but hurting now.

“The swim was good, all of the volunteers were clapping us along every time we passed them, the bike was nice but that headwind on the way back sucked and the same with the run,” she said. “The sprinklers were awesome and I loved the water stations, the kids were good there as well.”

After years of focusing on the pool, the two-time Olympic champion enjoyed the challenge of combing swimming, riding and running while preparing for the Mooloolaba Triathlon.