The local group proving sheds are for women as well

The local group proving sheds are for women as well 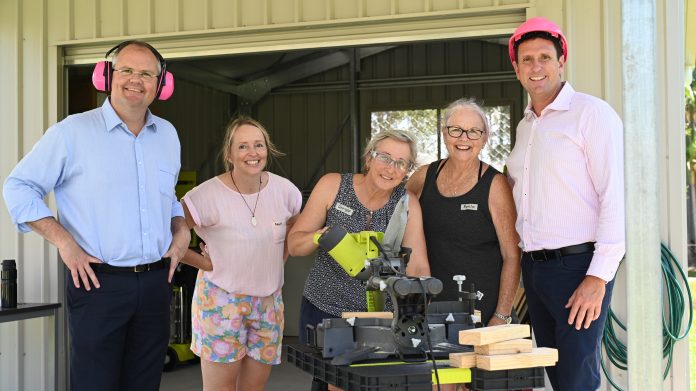 A Sunshine Coast community group is determined to buck the Australian mantra and prove that sheds are for women, too.

The Coolum Women’s Shed has helped launch the inaugural National Women’s Shed Week, which runs from March 6 to March 12.

President of Coolum Women’s Shed, Nell Harvey, said she was proud to bring Australian Women’s Sheds closer through the establishment of the event.

“Women’s Sheds are all about improving the health and wellbeing of members through building connections, reducing isolation and encouraging the development of new skills,” she said.

“Our members understand the value of being involved with the women’s shed first-hand and so we want to support other women in Australia to do the same.”

“We are now speaking with over 30 sheds across Australia who have registered their sheds with us, many of which will be running their own events and programs throughout women’s shed week.”

Mr O’Brien was responsible for major tax reform that enabled tax deductibility for men’s and women’s sheds and recently announced $11,350 of Federal Grants for the Coolum Women’s Shed.

“I’m a massive advocate for men’s and women’s sheds across Australia because I have seen the positive impact these organisations have on people’s mental and physical wellbeing,” he said via a press release.

“Now, thanks to the members of the Coolum Women’s Shed, it’s the Women’s Sheds that are on the national agenda this week.”

“I congratulate the Coolum Women’s Shed for its leadership in supporting the development of women’s sheds across the country.”

“It’s no coincidence that the inaugural National Women’s Shed Week coincides with International Women’s Day and Queensland Women’s Week, with the shared aim of progressing the importance of equality for women.”

Coolum Women’s Shed encouraged all Women’s Sheds to run events during this week and to use the hashtag #NationalWomensShedWeek on social media.

One of the key events during the week will be the open day on Saturday, March 12, from 10am to 3pm and it will be open to all women from the Sunshine Coast.

This year’s themes are #SHEddies and #OurTimeOurSpace, which highlight the importance of a dedicated space for women to participate in meaningful activities and build connections.

Organised by members of the Australian Women’s Shed Community, there were more than 300 members across Australia from at least 20 existing sheds and there were 20 sheds in the process of forming.

Women’s Sheds started in about 2010, three years after the first Men’s Sheds were introduced.

National Women’s Shed Week runs between March 6-12 and will highlight the breadth and variety of Women’s Sheds around Australia.

See more at The Women’s Shed.