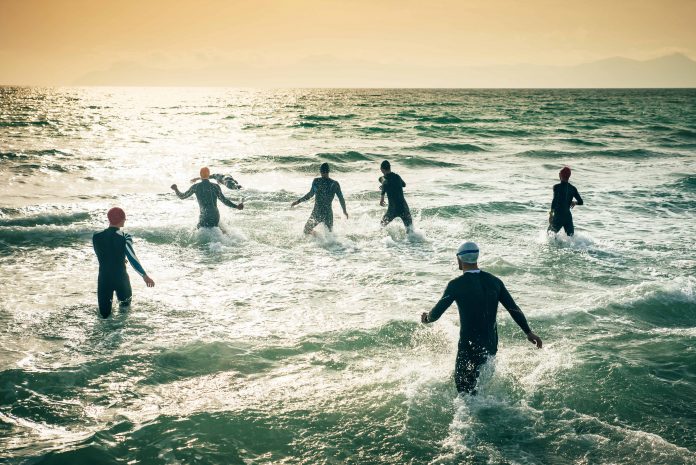 It’s hoped a new documentary on the big screen will shine a light on the Mudjimba Island Charity Swim and help the event survive and thrive.

The endurance test, which includes participants swimming 10km around the island, was first held in 2001 and it has become a key fundraiser for special schools on the Sunshine Coast.

But it lost momentum, due to COVID restrictions and uncertainty, in 2020 and 2021.

There were fears the annual fundraiser would not recover.

“I’ll be blunt. The event is close to being cancelled and folding,” 14-time participant Brendan Neil said.

“I’m concerned this swim will fold and we’ll lose such an iconic, community-spirited event and forget about these kids.”

Brendan approached television news identity Rob Brough in mid-2021 to help breathe new life into the event, and the documentary was born.

The trailer was recently released and Dare to Care, directed by Rob, will premiere at Kawana Event Cinemas on March 16.

“We’re using this to resurrect the swim event for 2022,” Brendan said.

“I need to get the word out for the movie premiere and fill the cinema with 200 people to save this event.”

The documentary celebrates the origin of the fundraiser and its impact on the community, especially for kids with special needs and their families.

Ashley was tasked to help at Nambour Special School for a day, when he discovered the school did not have enough funds for an excursion.

He approached veteran journalist Bill Hoffman and now-councillor Jason O’Pray, who were going to swim around Mudjimba Island, and they made a fundraiser out of it.

The tradition has continued with Atlas Events organising the event and a host of people joining in throughout the years.

The documentary outlines the Australian larrikinism that gave birth to the event and introduces viewers to a students and families.

Rob said he was motivated to bring the documentary to life.

“My inspiration came from my neighbour’s son, Lenny, who has cerebral palsy, and the beautiful relationship he has with his brother and sister,” Rob said in an event media release.

Meanwhile, Brendan was determined to see the event prosper into the future.

The 51-year-old was a devout participant in the charity swim and he also completed solo feats to raise additional awareness and funds for children at the special schools.

He has conquered the 10km course, from Mudjimba around the island and to Mooloolaba, 10 times in 10 days. He also Noosa to Caloundra (72km) and completed the 10km swim in one day. Brendan also swam from Caloundra to Noosa over two days last year.

“I approached Rob with a request to capture the history of the swim and give a voice to the kids and families of the special schools,” Brendan said in the release.

“Rob’s movie reminds us of the value of community and contribution. It’s beautiful and will make you cheer, laugh and maybe shed a tear.”

“This movie night is celebrating everyone involved over the last 20 years. We’re aiming to sell 200 tickets and re-launch the event for 2022.”

The movie premiere will be held at Kawana Event Cinemas on March 16, from 6.30pm. For tickets to the documentary go to Event Cinemas. To watch the trailer, head to YouTube.

The swim is scheduled to be start at Mudjimba Beach on May 7, from 7.30am, and it will finish at Mooloolaba Beach. For more information, see Mudjimba Island Charity Swim.