Wave of concern as Golden Beach foreshore under siege

Wave of concern as Golden Beach foreshore under siege

Wave of concern: Golden Beach foreshore under siege as swell pushes through gap in Bribie 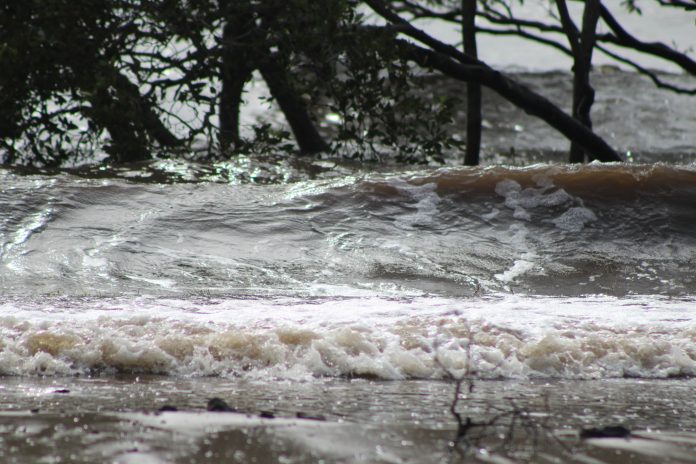 This follows Bribie Island being breached by erosion in early January and the rapid expansion of the breakthrough.

In a few short months, it has forced changes in the tides and reshaped channels and banks.

The new entrance, opposite Nelson Street near the shopping precinct, has since widened to about 400m and exposed the narrow waterway to the ocean.

Although large sandbanks inside the passage are currently breaking up the swell, waves are reforming and can be seen crashing over the foreshore and swamping walkways and parkland just metres from homes.

On the high tide Tuesday and Wednesday, Sunshine Coast News photographed whitewater surging into the area between Jellicoe St and Monash Park, near the Caloundra Power Boat Club.

This area contains precious mangroves, which are now at the mercy of surf. A king tide of 2m will roll in Thursday morning, creating more headaches.

Mr Flood said he had been paddling his Stand-Up Paddleboard over to Bribie for years and while the estuary could have strong tides, it did not have the bouncy swell and movement it had now.

“There are waves reforming and coming through. The mangroves and the infrastructure along the foreshore won’t cope with that,” he said. “This is something we have not seen before.”

Mr Flood said you could now see every large ship heading in and out of the Port of Brisbane through the large gap in Bribie.

He said surfers who chased waves off the island knew that when the incoming ships turned the buoy positioned 800m off the island, this generated considerable wash, which turned into waves a short time later.

“Who knows what the long-term impact of all this wash, which will now be coming through the new channel, could be?”

A couple passing by the rock wall and beach that council is trying to fortify had to swerve as whitewater engulfed the path.

“This is pretty crazy,” they said. “Surf at Golden Beach, who would have thought?”

A Diamond Head mum who brought her children down to see the waves at Monash Park said it would have to be a major concern for the nearby homes.

Community meetings have been held with residents voicing their concerns to Sunshine Coast Council and Member for Caloundra, Jason Hunt, about changes within the passage and the possibility of inundation during king tides, storm surges or heavy rain.

Council said it was closely monitoring the impact the naturally-occurring event was having on the mainland.

It recently engaged a dredge that is pumping sand on to the foreshore in a bid to bolster it against the elements.

Council also has set up a dedicated webpage to keep the community updated at sunshinecoast.qld.gov.au/bribieplan. This webpage will be updated regularly as any new observations, investigations, actions or information from council becomes available.