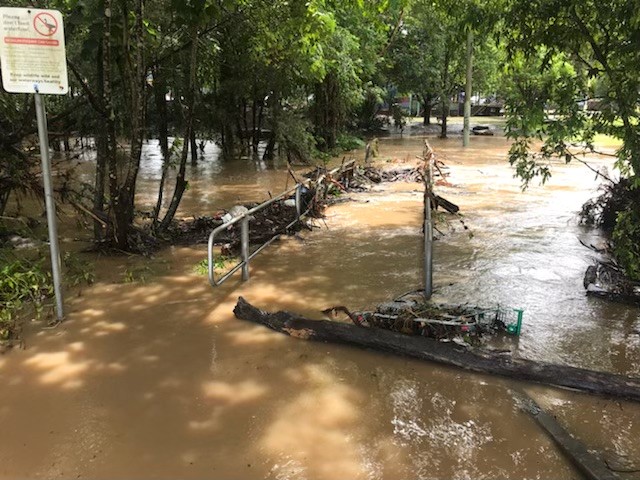 Parts of the region remain flooded and many roads are still closed or partly closed and needing major repairs.

The Bruce Highway between Brisbane and Traveston has re-opened for priority travel but drivers are reminded to only travel for essential reasons.

Sections of the highway in the south will operate at reduced capacity and reduced speed limits.

“People should allow additional travel time between Brisbane and Traveston with delays expected and be on the lookout for emerging potholes after the flooding,” said Transport Minister Mark Bailey.

The Bureau of Meteorology has warned severe thunderstorms are set to return this week in what is expected to frustrate clean up efforts.

“They can bring heavy rain and damaging winds and large hail that will continue to impact the recovery efforts ongoing through southeastern parts of Queensland.”

Logan and Gold Coast City Councils are bracing themselves with flooding expected to exceed record 2017 levels on Tuesday.

The regions are copping the tail end of a low-pressure system moving south that has dumped one year’s worth of rain on parts of the southeast, affecting about 15,000 homes.

The Logan River is set to exceed the landmark 2017 flood level of 20.50m when ex-tropical cyclone Debbie hit.

About 1000 properties are already affected in the region before the 9am Tuesday predicted peak, prompting the council to open a 24-7 evacuation centre at Crestmead.

“Our residents are very resilient. We have had a lot of floods over the last 10 years or so,” Logan Mayor Darren Power told AAP.

“Residents are getting used to it…but they are not taking this lightly. It could be a long morning with the Logan River tomorrow.”

Gold Coast Council has issued emergency alerts for Currumbin Valley and Tallebudgera Valley with 24-7 evacuation centres at Burleigh and Ormeau.

Gold Coast beaches will remain closed on Tuesday with a sandbag station set up at Pimpama.

In Brisbane, emergency services are monitoring a crane on a pontoon that broke free of its moorings near the Story Bridge on Monday afternoon due to major flooding.

Police are monitoring the pontoon which was tilting but largely stationary on Monday night.

A tug boat is on standby to intercept it, with evacuation orders for the Howard Smith Wharves and riverside walkways downstream still current on Monday night.

“The contractor is working with the Maritime Safety Queensland Harbour Master and Queensland Police to further secure the barge,” a Brisbane City Council spokesperson told AAP.

The death toll reached eight after a man’s body was found in a submerged car with his dog in the Currumbin Valley on the Gold Coast on Monday.

There are also “grave concerns” for two men missing in floodwaters in inner Brisbane and at Glen Esk.

Major flooding is underway on the Brisbane, Logan, Bremer and Mary rivers, and Warrill Creek ahead of another high tide on Monday night after record rainfall over a seven day period.

Brisbane copped 795mm — the wettest week since records began in 1840.

About 15,000 southeast homes have been affected.

Some schools in Sunshine Coast, Noosa and Lockyer Valley will reopen.

Through the Disaster Recovery Payment, eligible adults may be able to claim up to $1,000, and $400 for each eligible child under the age of 16 if they have been seriously affected as a result of the floods. This includes instances where homes have been damaged or destroyed, or where serious injury has occurred. More information is here.

Through the Disaster Recovery Funding Assistance package, jointly funded by the Commonwealth and State Government, eligible residents experiencing financial hardship as a result of the floods will be able to access up to $180 per person, to a maximum of $900 per household. More information is here.

Through the Disaster Recovery Allowance, employees, small businesspersons and in particular, farmers who have experienced a loss of income as a direct result of the flooding may be eligible for payments at the rate of JobSeeker for up to 13 weeks. More information is here.

At the same time, the Federal Government is pausing Centrelink debt recovery in affected locations in Queensland. Eligible residents can nominate to pause repayments through their Centrelink online account or the Express Plus Centrelink app.

Member for Fairfax, Ted O’Brien, said the Federal Government funding would help support the thousands of affected locals as they begin to recover from the disaster.

“It’s going to be a long road to recovery for many parts of the Sunshine Coast which have
been battered by this once-in-a-generation flood, but rest assured the Federal Government
will provide the support we need to get to the other side of this,” he said.