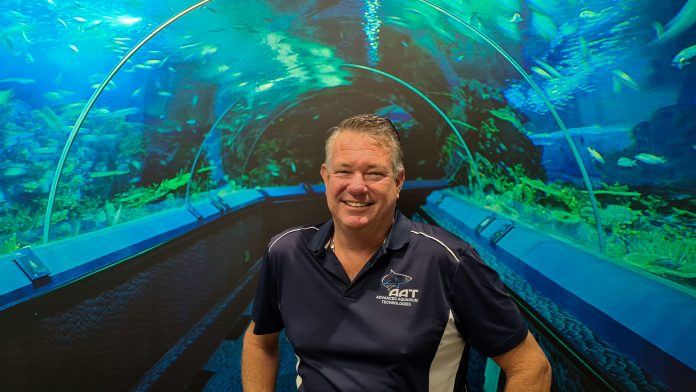 For a man who used to be scared of sharks, John Langmead has walked down an incredible path – one that has enabled millions of people around the world to get up close and personal with a plethora of marine species.

Growing up on the Sunshine Coast, Mr Langmead had a love of the ocean and was a keen surfer during his school years at Maroochydore High.

But it wasn’t until he became more acquainted with sharks and their habitat that his fear transformed into a healthy respect.

His fascination for the ocean prompted him to complete a dive course straight out of school.

Money was tight in his family and as fate would have it, he won the dive course in a local radio giveaway.

This helped him land his first job collecting aquarium fish in 1985.

“When I first started fish collecting, I was very scared of sharks,” he said.

“But then I got a job at Underwater World (now SEA LIFE Sunshine Coast) and spent nearly seven years hand feeding them in the tank.

“I have a lot more respect for them now.

“I think they’re quite misunderstood.

“If people get eaten by a shark, it’s mistaken identity.

“Dawn and dusk are the wrong times to be in the water.”

Mr Langmead has spent more than two decades learning the intricacies of the aquarium industry, going on to build and operate some of the world’s most iconic and inspiring aquariums.

It was his job at Underwater World in Mooloolaba that catapulted him towards his extraordinary career.

Having been promoted to a range of leadership roles, he learned about aquarium operations, as well as how to care for marine species and deliver great visitor experiences.

A major career highlight came in 1996, when he was appointed project manager at Living Ocean to oversee the delivery of an $11 million contract with Ocean World, a new $50 million aquarium in Guangzhou, China.

On the back of this successful project, he was appointed manager of a $13 million specialist works project at Shanghai Ocean Aquarium.

He then established his own company, Advanced Aquarium Technologies.

When AAT was named Business of the Year at the Sunshine Coast Business Awards in November, it left many wanting to know more about this Sunshine Coast-based business that had largely flown under the radar, and the man at the centre of its success.

As AAT’s CEO, Mr Langmead has spent 25 years establishing AAT as the world leader in the design and construction of aquariums.

His innovations have made the building and operation of aquariums easier, more reliable, more efficient and better for animals and visitors alike.

AAT’s first ‘lead contractor’ project was the delivery of the Life Support System at Sea World’s Shark Bay on the Gold Coast in 2003.

Since then, Mr Langmead has overseen the design, delivery and operation of some of the world’s largest public aquariums, as well as smaller aquariums in shopping centres, resorts, underwater restaurants, hospitals, research facilities, private properties, zoos and theme parks.

When he’s not on the road for work, Mr Langmead lives in Minyama with his wife Michaela, who works in the administration side of the business, and his daughter Kirra, who finished school last year and will follow in her father’s footsteps by studying marine biology. Son Jay works in the construction management side of the business and is currently in Bahrain.

Pre-COVID, Mr Langmead spent much of the year travelling overseas but he is now grounded at the AAT factory in Kunda Park.

“Kunda Park is our base, but very little is known about what actually goes on worldwide,” he said.

“We are the largest aquarium company in the world and have won many awards over the years.”

He cited the Hong Kong Ocean Park Grand Aquarium, Danish National Aquarium and S.E.A in Singapore as some of AAT’s greatest aquariums.

“I had no idea my career could have led me to this,” he said.

“I’m just very fortunate that’s how it has worked out.

“Our business is dynamic and has just continued to grow.

“In 2016, we bought the rights to Plexiglas, so we manufacture the acrylic windows you see in aquariums now.

“It was invented in Germany some 85 years ago and we now manufacture some of the largest windows in the world.”

While the numerous technologies and design innovations associated with creating world-class aquariums is fascinating in itself, Mr Langmead liked to remember the ‘why’ of what his company does.

Quietly spoken and with an unassuming demeanour, there’s a sense he’s in it for the right reasons: to bring joy and an unforgettable educational experience to people around the world.

“I’m a diver, so I like to be able to bring these animals to the people,” he said.

“The education side is super strong in public aquariums worldwide and we’ve had massive scientific breakthroughs by having this giant body of water being able to be studied.

“It’s never really been just a job for me.

“I’ve been very blessed to be in this business and I could do it again and again.”