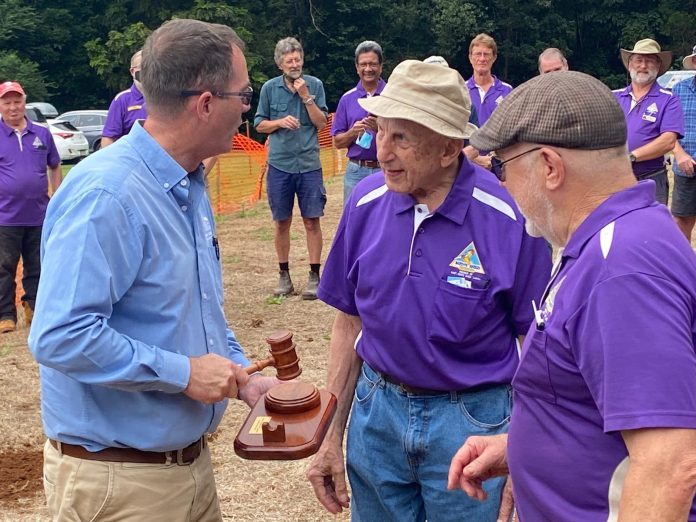 Men’s Sheds on the Sunshine Coast have been encouraged to ask for funding as their membership grows.

Funding has been made available to support men’s health, via the Federal Government’s National Shed Development Program.

Federal Member for Fisher Andrew Wallace urged local Men’s Sheds to put in an application, for a share of $500,000.

Mr Wallace, on a visit to the Maleny and District Men’s Shed, said grants of up to $10,000 had previously been used to purchase lifesaving defibrillators, IT equipment and to provide essential training.

“The Federal Government will continue to support Men’s Sheds as part of our comprehensive approach to improving the health of Australian men and I urge our Men’s Sheds to put their hand up for this round of funding. Applications are closing very soon.”

Maleny and District Men’s Shed Secretary Lindsay Hay said a rising number of retirees in the region had seen increasing demand for the benefits that the Men’s Shed movement provides.

“These benefits include opportunities to learn new skills or mentor expertise, build a social network and pass time meaningfully in the company of mates,” Mr Hay said.

“But more importantly Men’s Sheds provide a collegiate network of support, advice, and fellowship for men of all ages around their mental and physical health, aspects of wellbeing that men are sometimes reluctant to address.”

The Maleny and District Men’s Shed, which celebrated its 10th anniversary in 2021 and has more than 50 members, will soon build a second shed, which was donated by the Australian Defence Force and previously used in Vietnam.

There will also be an extension to their parking lot, to include disabled parking.

“This new resource will allow the expansion of the Men’s Shed services into alternative clean activities such as leatherwork, lead lighting, cards, computers etc, as well as a breakout space for meals and information sessions,” Mr Hay said.

“These cannot be practically conducted in the current shed which is dedicated to wood and metal work. Moreover, the existing shed has reached effective capacity.”

There were more than 1000 sheds nationwide, including several on the Sunshine Coast.

Mr Wallace said they provided a safe and friendly environment, where men could work on meaningful projects and build social connections.

“They are an integral part of their local communities and support men of all ages in many ways.”

There are grants to Men’s Sheds in three categories – health and wellbeing events, shed improvements, and tools and equipment.

The NSDP provides funding to Men’s Sheds through a competitive grants process. Applications for Round 23 of the NSDP close on February 25..

More information can be found at the Australian Men’s Shed Association.