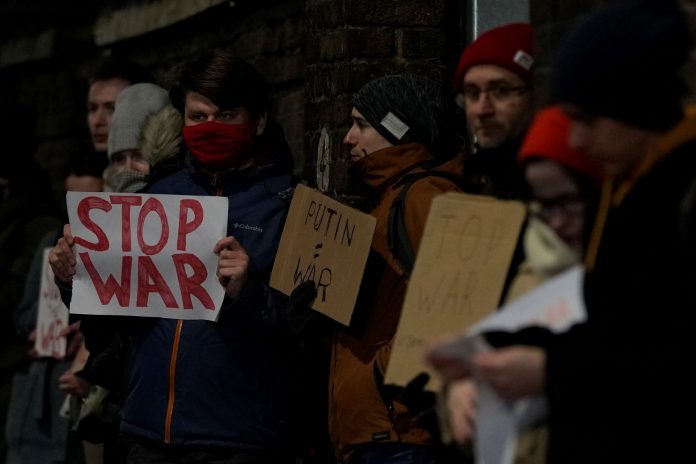 Prime Minister Boris Johnson said Britain and its allies would unleash a massive package of economic sanctions to hobble the Russian economy after the Kremlin launched an all-out invasion of neighbouring Ukraine.

Western nations are expected to announce coordinated sanctions after earlier this week imposing a limited initial package that was criticised by some as a weak response to Russia’s recognition of two breakaway regions in Ukraine.

“In concert with our allies, we will agree a massive package of economic sanctions designed in time to hobble the Russian economy,” Mr Johnson said.

He said the West must end its reliance on Russian oil and gas which had given Russian President Vladimir Putin a grip over Western politics.

“Our mission is clear: diplomatically, politically, economically, and eventually military, this hideous and barbaric venture of Vladimir Putin must end in failure.”

In earlier comments on Twitter, the British leader called the invasion a “catastrophe” for Europe, and said he would talk to other G7 group of rich nations.

“I will also speak to fellow G7 leaders and I am calling for an urgent meeting of all NATO leaders as soon as possible,” he said.

In his address on Thursday, Mr Johnson told Russians he did not believe the invasion was being carried out in their name, while he vowed to support Ukraine until the flame of freedom “burns bright again”.

“I don’t believe that the Russian dictator will ever subdue the national feeling of the Ukrainians and their passionate belief that their country should be free,” he said.

“I say to the British people, and all who have heard the threats from Putin against those who stand with Ukraine: We will of course, do everything to keep our country safe.”

President Vladimir Putin said he had no other option but to order what he has called a special operation against Ukraine, saying all of Moscow’s previous attempts to change the security situation had come to nothing.

In a televised meeting with business leaders, Mr Putin told Alexander Shokhin, the head of the Russian Union of Industrialists and Entrepreneurs, that the action Moscow had taken was a “necessary measure” and he knew that sanctions would follow.

“We were simply not given any chances to act differently,” he said.

US President Joe Biden also unveiled harsh new sanctions against Russia, imposing measures to impede Russia’s ability to do business in the world’s major currencies along with sanctions against banks and state-owned enterprises.

“This is a premeditated attack,” Mr Biden said.

“Putin is the aggressor. Putin chose this war. And now he and his country will bear the consequences.”

Mr Biden said the sanctions were designed to have a long-term impact on Russia and to minimise the impact on the United States and its allies. And he said Washington was prepared to do more.

He said the sanctions would limit Russia’s ability to do business in dollars, euros, pounds and yen.

Mr Biden said NATO would meet on Friday to map out further measures. He reiterated that the United States would not engage in war with Russia, but that it would meet its Article 5 commitments to defend NATO partners.

He said this was a dangerous moment for all of Europe, and that he had authorised troops that had been placed on stand-by to deploy to Germany.

“Putin’s aggression against Ukraine will end up costing Russia dearly,” Biden said. “Putin will be a pariah on the international stage.”